In recent seasons, high-end shoe designers has taken the men’s loafer shoe into new heights of fashion, making what has long been a men’s staple shoe into a coveted high fashion must-have for women everywhere. Women’s high fashion loafers have appeared in so many collections (and permutations) over the past few seasons, that this usually understated shoe has become truly beyond fabulously trendy. It has become epic. Formerly seen only at preppy brands, the loafer has been taken up by such unlikely champions as Nicholas Kirkwood, the London-based footwear designer whose designs are not generally described as understated, in a pilgrim-inspired, rhinestone buckle version from Marc Jacobs; a suede platform loafer from Saint Laurent Paris and a gold-tipped kiltie-style from Chloé. The trend has even drifted downwards to H&M, Payless, Zara, and other “fast fashion” and mid-priced merchandisers. The loafer rules.

Few men’s shoes today are more flexible and diverse than loafers. Chances are that you have at least one pair of loafers

somewhere in your closet. The penny loafer is a classic. It’s every boy’s first dress shoe (no laces), looks perfect when beaten-up and broken down through your college days, and later is spiffy enough for the office. It’s a lifelong wardrobe staple and just about the most versatile shoe a man will ever own. The history of the loafer is really a simple one. The first loafer, as known and beloved by men today, was reportedly inspired by a 1930s photo in “Esquire” magazine, which captured a group of Norwegian dairy farmers wearing slip-on shoes. The farmers were standing around the “loafing” area where cows were waiting to be milked, which is why in 1933 the Spaulding Leather Company of New Hampshire 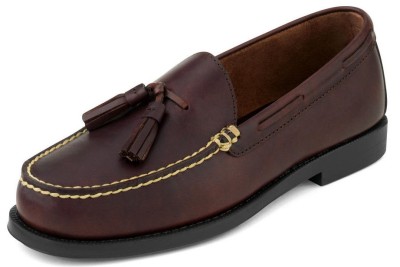 trademarked its new line of men’s footwear as Loafers.

A Maine shoemaker named John Bass had seen the same article, but was slower to act on it than his neighbor. So when Bass introduced his version of the loafer in 1936, he called them Weejuns, which was slang for Norwegians. One of the characteristics of the Bass shoe was a diamond or lip-shaped notch in the decorative, supportive leather band than ran across the instep. Some say the design was supposed to represent the lips of John’s wife, Alice, kissing each pair on their way out the door. But teenagers who wore the shoes started putting a penny in the slot for good luck, and the penny loafer was born. Manufacturers known for their men’s loafers include Florsheim, Johnston Murphy, Bally, Clarks, Kenneth Cole, Gucci, Eastland and Cole Haan, among others. The Italian fashion house of Ferragamo also makes loafers, as does Red Wing, although Red Wing is more commonly associated with work boots than casual shoes. Because the shoes were made of leather and often had simple, understated embellishments on the vamp, loafers could also be worn to work. In particular, the tassel loafer, some with wing-tip designs over the toe, became popular with attorneys and white-collar professionals. And they still are.

Because they could be slipped on, loafers were equally as popular with students in casual, social settings. Considered the official footwear of the preppy lifestyle, the penny loafer has earned its place in history, along with the cotton chino, the oxford shirt (preferably white with button-down collar) and the navy blazer, as an American wardrobe essential that’s timeless, stylish and appropriate for any occasion. The penny loafer had its heyday in the late nineteen fifties and early sixties when the shoe became a pervasive trend on Ivy League campuses. With socks, without socks, sometimes even with white tube socks and shorts, the penny loafer became a centerpiece of the newly solidifying post-war “Ivy League Look”. And although they lost some of their popularity during the youthquake turbulent years of the late 1960’s and into the 1970’s, the penny loafer managed to stage resurgence during the go-go, Wall Street Boom years of the 1980s. I remember having to wear penny loafers as part of my uniform throughout my entire pre-college school years (in the 1980’s0 and I loved them. Even today, GQ, Details, and Esquire prominently features loafer styles throughout a majority of their photo-editorials in each month issue of their magazines. It’s just the perfect shoe.

That’s why loafers—with or without the penny—have become an indispensable part of any stylish warm-weather wardrobe. They are just as appropriate for a summer wedding (when worn with khaki pants and a navy blazer). They are for a weekend spent running errands, without socks, in a pair of cargo shorts. And they are ideal for the office. This versatility, coupled with time-honored craftsmanship, ensures that loafers–penny or not–will remain an icon of style for decades to come.

Since 1955, three generations of the Maine-based Eastland family have been crafting timelessly classic, casual leather 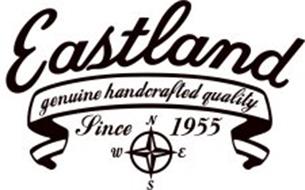 footwear of the finest workmanship, comfort and quality standards. Full-grain leathers, handcrafted detail, durable soles and exceptional comfort are built into every pair. Drawing from the state’s long-standing tradition of handsewn footwear, the Eastland brand is known for its Americana heritage-inspired style that reflects their Maine roots and long-standing traditional shoemaking principles. Their various footwear collections–including the premium Made in Maine USA and Eastland 1955 Edition Collections–offer styles for modern women and men who appreciate New England classic attitude, long-lasting quality and great value in their casual (and dress) footwear.

Loafers are not formal shoes, but they look fantastic with a coat and tie. They elevate your look everytime. You can really add a little flair your next time out with a pair of tasseled loafers to match your slacks. They give you a little more style with a blazer and slacks and are great when you want a different look and aren’t going formal. They’re also a nice bridge into nicer men’s dress shoes. The Eastland Men’s Topsham Tassel Loafer (from the 2013 Spring/Summer collection), hand-sewn from one piece of leather wrapped around your foot for seamless comfort, “no break-in” flexibility and long-lasting wear, looks sharp and comes equipped with a full length, cushioning OrthoLite® comfort insole with patented moisture and odor control keeps you cool and dry all day and a flexible TPR rubber outsole that delivers great comfort, slip resistance and durability. 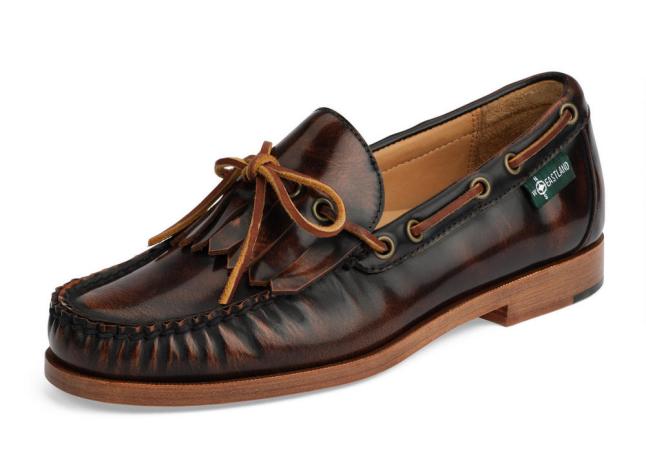 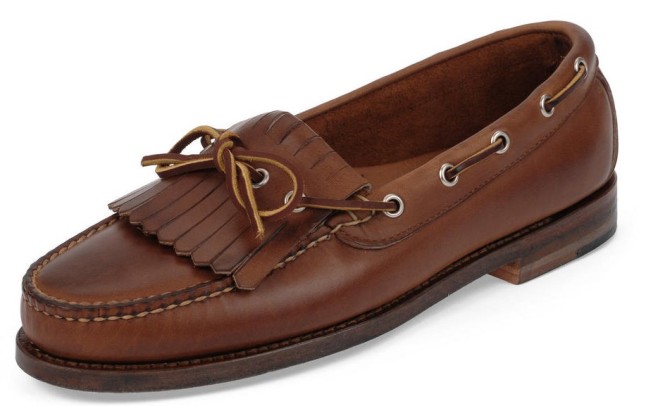 Wearing Men’s Loafers at the Office

While most men, even with the blessed return of wearing a suit and tie to the workplace, work in an office that doesn’t require them to wear said suit, that doesn’t mean you can dress like an unshaven slacker on his way to 7-11 for cigarettes. (Well, you can, if you work in certain technology sectors. After all, they want you for your mind and will overlook your unwashed B.O.) However, most office dress policy requires men to make a concerted effort to look presentable, and that usually means wearing a loafer-type shoe with khakis and a clean shirt, if not a tie. This should definitely be a look you have in your closet, because it works for almost any situation. Eastland’s Men’s Fryeburg USA Bow Tie Tassel Loafer, made in Maine, USA, is the ultimate New England gentleman’s classic tassel loafer and features hallmark Maine style details such as handstiched kicker, collar-lacing and double leather sole – crafted from premium 100% American Horween® leathers, genuine leather welt, cushioned leather socklining and double leather sole. Even when you pull your suit out of the closet for an off-site client meeting, the Fryeburg is the perfect finishing touches to what is a professional presence. 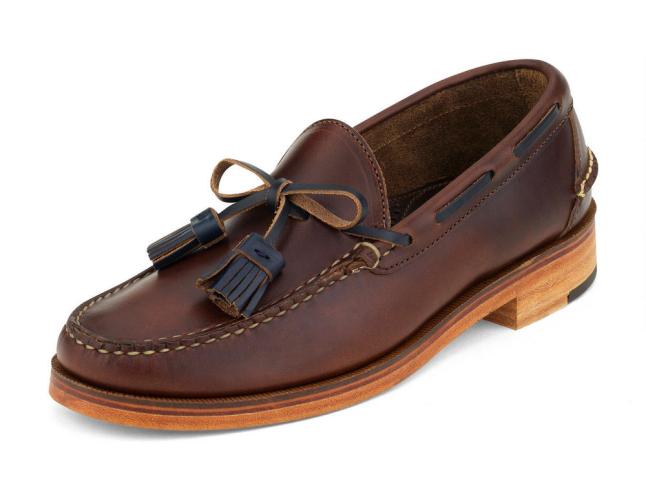 Dressing up a pair of jeans, casual chinos or corduroys is something that is very trendy right now. (It probably has something to do with many jeans costing upwards of $200 nowadays.) For your weekend outings, a sport coat and fitted collared shirt looks great with jeans and loafers. Both of these work perfectly with tasseled and non-tasseled loafers. The Eastland Portsmouth Penny Loafer and the Men’s Stratton 1955 Flat Strap Penny Loafer (a modern take on the flat strap penny loafer, pulled from Eastland’s design archive) are two top flight candidates for your weekend activities. As with all Eastland shoes, they are handsewn by skilled shoemakers utilizing leather upper conforming to your foot for a custom fit. 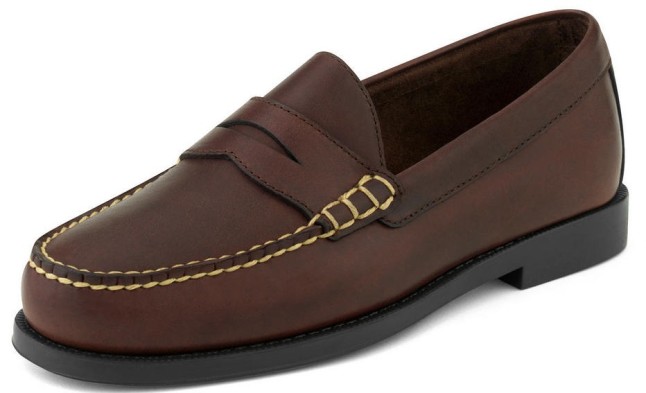 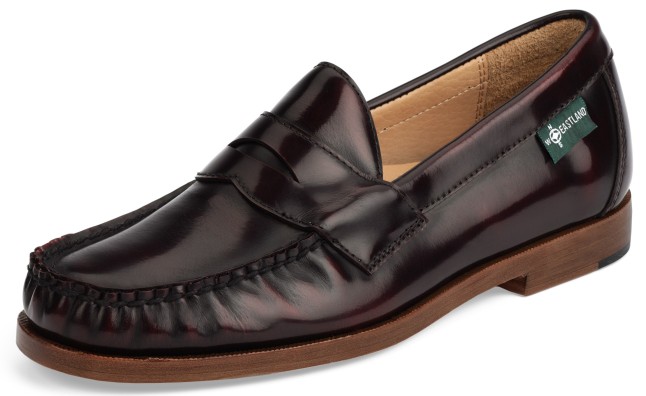 And the innate versatility doesn’t stop there. Again, while the loafer is considered a warm weather shoe, they can be worn well will into October/late November before the winter season begins and you switch out into heavy-duty boots and LL Bean duck boots, themselves also considered a classic. Ultimately, the loafer is a shoe with its own quiet brand of glamour and equal steadfastness. Moreover, it’s remarkably catholic in its appeal, swinging from one end of the style spectrum to the other, all the while appealing to men and women, young and old, the fashion conscious as well as the oblivious, in countries all around the world. There’s something very liberating about wearing something so broadly accepted, so timeless. While “Timelessness” is a seriously overused word in fashion, however in this case it’s most appropriate. All the loafer styles mentioned above can be found online at www.eastlandshoe.com