Captured by the Special Operations Photographers of the Department of the Army Special Photographic Office (DASPO), These Photos Provide A Unique Perspective Of The War.

Original photographs and motion pictures by the men of Department of the Army Special Photographic Office (DASPO) are at the center of a new exhibit, FACES OF WAR: Documenting the Vietnam War from the Front Lines, by the Pritzker Military Museum & Library on the Vietnam War, now on view. This collection of photographs and motion pictures captures the Vietnam War as it was experienced by some of the 3.4 million Americans who served in the Southeast Asian Theater—the aggression, the misery, and the hope—as well as the millions more who attempted to carry on as the conflict waged at their doorsteps. Produced in partnership with the DASPO Combat Photographers Association, the Museum & Library’s new FACES OF WAR exhibit and permanent online gallery are largely supported by the contributions of private donors and the DASPO veterans themselves. 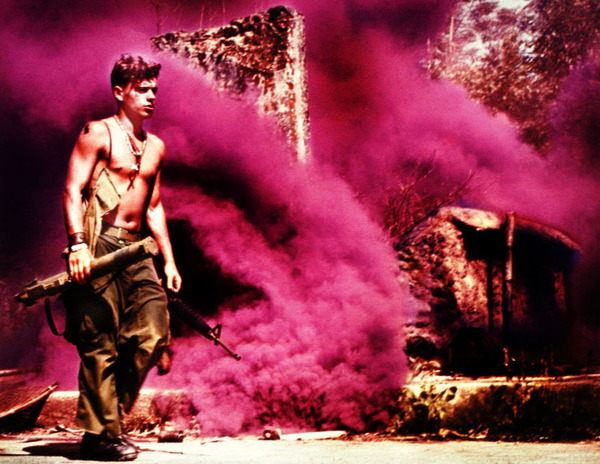 The exhibit—titled FACES OF WAR: Documenting the Vietnam War from the Front Lines—includes dozens of rarely seen photos and motion pictures from Vietnam; a collection of artifacts, including original cameras, gear, and equipment; and an audio tour with commentary by DASPO veterans on their experiences and the legacy of their work. The men of DASPO were dedicated professionals who took pride in documenting United States Army activities around the world. Putting their lives on the line, these still photographers and motion picture cameramen covered every United States Army campaign of the Vietnam War.

The Vietnam War (1955-1975) traces its roots to the colonization of Vietnam by France in the late 19th Century. In 1884, all of Vietnam fell under French rule; in 1887, it was fully integrated into French Indochina. France developed a Western system of education throughout its colonies, propagated Roman Catholicism, and developed a plantation economy to promote the export of tobacco, indigo, tea, and coffee. French settlers moved mostly into southern Vietnam and based themselves around the city of Saigon. Independence movements against French rule developed at the start of colonization, but France maintained control of Vietnam until World War II (1941-1945), when Japan occupied the country. 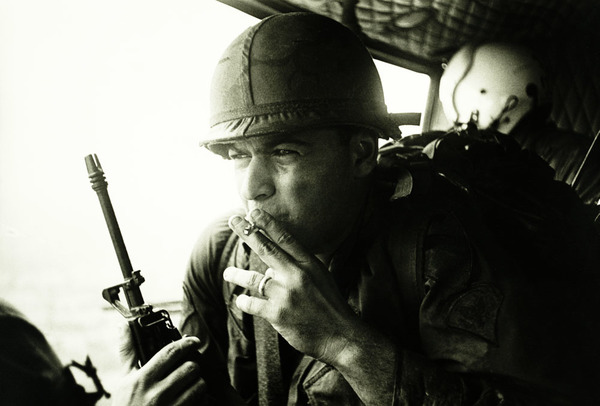 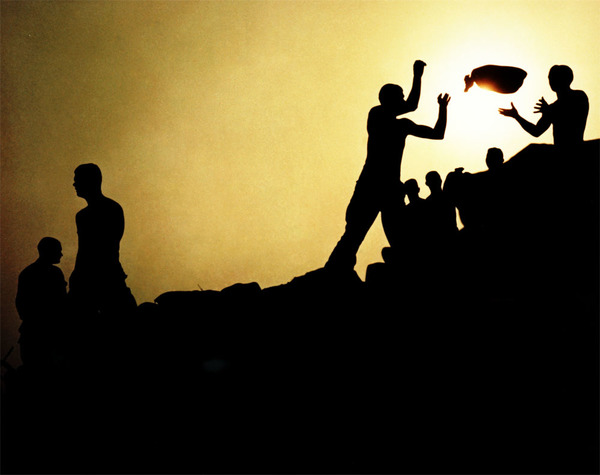 During World War II, a national liberation movement formed under the direction of communist revolutionary leader Ho Chi Minh to combat the French and the occupying Japanese forces. The Viet Minh, as they were known, coordinated their efforts with Allied troops fighting in the war’s Pacific Theater until the eventual defeat of Japan in 1945. After the war, the Viet Minh moved to the city of Hanoi in northern Vietnam and proclaimed national independence under a provisional government—a move that would lead to the outbreak of the First Indochina War (1946-1954) as France sought to reclaim its colony. 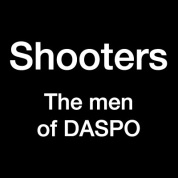 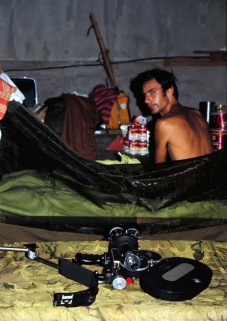 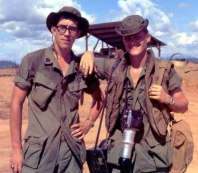 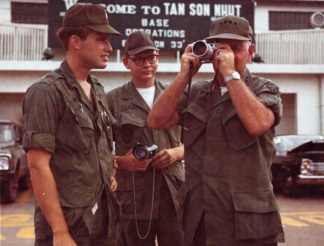 Backed by communist governments in the Soviet Union and the newly formed People’s Republic of China, the Viet Minh held their ground. In 1950, the fighting escalated to a Cold War crisis as the Korean War raged to the north. At the Geneva Conference of 1954, an accord was reached with the hope of finding a peaceful resolution, calling for the separation of Vietnam at the 17th parallel with French loyalists moving to the south and communist sympathizers moving to the north. The Geneva Accords stipulated that Vietnam be reunified by a national election in 1956, but as unification efforts stalled and Cold War tensions continued to build, the United States became increasingly involved. In addition to contributing equipment and millions of dollars in financial aid, the U.S. soon deployed a contingent of non-combat personnel with its Military Assistance Advisory Group (MAAG) to train Republic of Vietnam (RVN) forces and to oppose the spread of communism into South Vietnam. 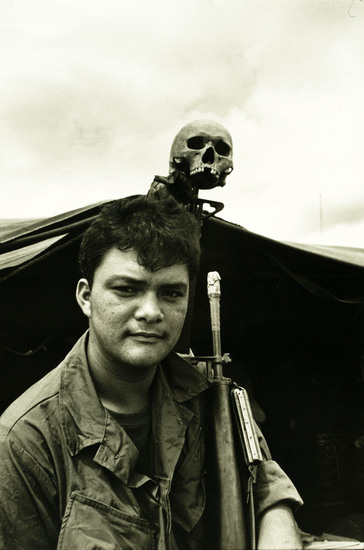 Hoochmate, 1968. An infantryman with the 1st Battalion, 12th Infantry, 2nd Brigade, U.S. Army 4th Infantry Division displays above his tent a skull that he found on patrol near Camp Warrior in Pleiku Province. Photo by Specialist 5 Richard A. “Dick” Durrance, U.S. Army.

With the Soviet Union similarly supporting its communist allies in North Vietnam—officially called the Democratic Republic of Vietnam (DRV)—and stepping up its Cold War rhetoric with the U.S. government, tensions continued to mount over the next several years. In early August 1964, the controversial Gulf of Tonkin incidents—during which the United States alleged two separate confrontations with the North Vietnamese Navy, including an unprompted attack on USS Maddox by a trio of torpedo boats—gave the impetus for the passage of the Gulf of Tonkin Resolution by Congress, enabling President Lyndon Johnson to authorize direct military action without a formal declaration of war. 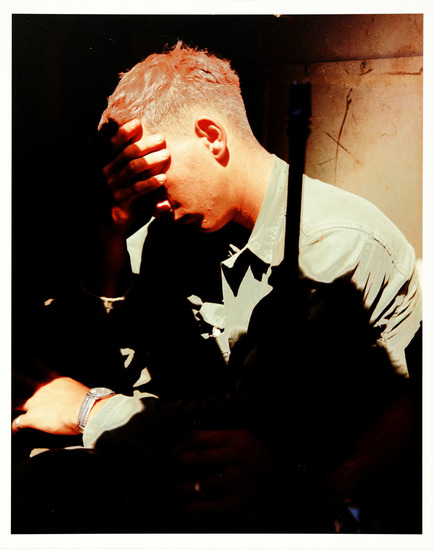 By February, 1965, the U.S. had begun sustained bombing raids throughout North Vietnam and, after several attacks on air bases, deployed 3,500 United States Marines to Southeast Asia. In spite of this support, the Army of the Republic of Vietnam (ARVN) continued to suffer significant losses, leading U.S. Army General William Westmoreland—then the head of Military Assistance Command, Vietnam (MACV)—to advise President Johnson to increase the presence of American ground forces in June. 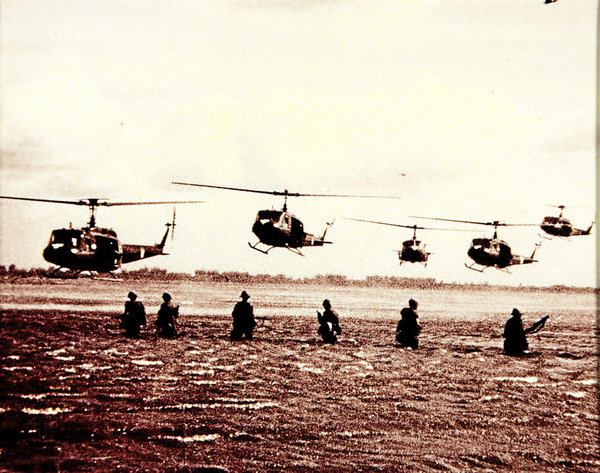 For most of 1965, American troops were limited to Search and Destroy missions to combat the guerilla warfare tactics used by the DRV, which often relied on ambushes and hit-and-run attacks to surprise their targets—a practice used throughout the war, leading many veterans to question whether the conflict ever had a “front line” at all. Finally, on November 14, the first conventional engagement and major battle of the Vietnam War was waged as members of the United States 1st Air Cavalry Division clashed with DRV units in the Ia Drang Valley of the Central Highlands. Both sides considered the battle a victory.

As the U.S. continued its efforts to expand, equip, and train South Vietnam’s forces and to gradually assign them an increased combat role, the numbers of U.S. troops in Southeast Asia were steadily reduced. By the end of 1970, American ground forces had participated in their final major operation of the war and their total numbers stood around 330,000. A year later, that number had been reduced by more than half to 150,000.

The peace talks originally begun in 1968 progressed slowly until January 1973, when representatives of the United States, the DRV, the RVN, and South Vietnam’s Provisional Revolutionary Government met in Paris to sign the “Agreement on Ending the War and Restoring Peace in Vietnam.” Negotiated primarily by U.S. National Security Advisor Henry Kissinger and North Vietnamese politician Lê Đức Thọ—who were jointly awarded the Nobel Peace Prize for their efforts—the Paris Peace Accords of 1973 ended direct U.S. military involvement and resulted in a temporary ceasefire between North and South.

With the U.S. no longer standing in its way, North Vietnam quickly began to rebuild its military infrastructure and to reestablish its vital supply lines to the south. In March 1975, the PAVN and the Viet Cong launched a large-scale series of attacks that quickly overwhelmed the South Vietnamese defenses, and on April 30, the capitol city of Saigon was captured. In its final act of non-military aid, the United States helped evacuate more than 130,000 refugees whose lives were at risk in South Vietnam. With martial law in effect, many more would lose their lives trying to escape. 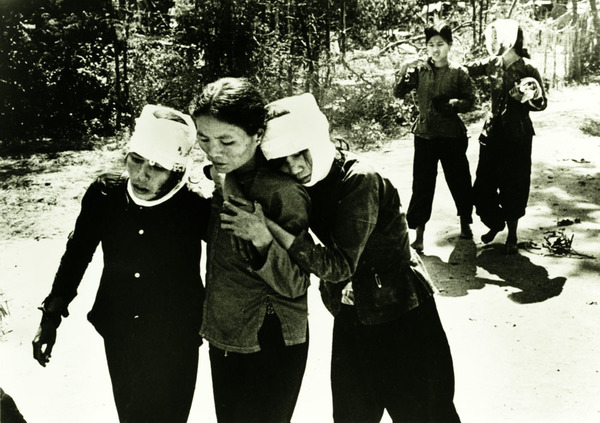 Refugee, 1975. A South Vietnamese refugee cries upon her arrival at Eglin Air Force Base near Valparaiso, Florida. Photo by Specialist 5 Bryan K. Grigsby.

In the years immediately following the war, more than one million South Vietnamese were forced to enter reeducation camps, where they were imprisoned for years without formal charges or trials. A million more, mostly city dwellers without direct ties to the military or government, were forced from their homes to the jungles, where they were made to develop farmland. Tens of thousands were tortured or killed. As a result of these practices, some two million “Vietnamese Boat People” fled their homeland between 1975 and 1995, seeking asylum in neighboring countries and leading to a humanitarian crisis that ended with more than half of the refugees being resettled in the United States.

Today, after decades of reforms that began in earnest in 1986, Vietnam’s economy is one of the fastest growing in the world. The Vietnamese government has established strong dipolomatic relations with the United States, even allowing American citizens—including Vietnam War veterans—to visit recreationally. Meanwhile, the Vietnamese-American community has prospered in the United States, with thousands serving in the U.S. military—including U.S. Army Brigadier General Viet Luong, who in 2014 became the first Vietnamese-born general in the history of the American armed forces. 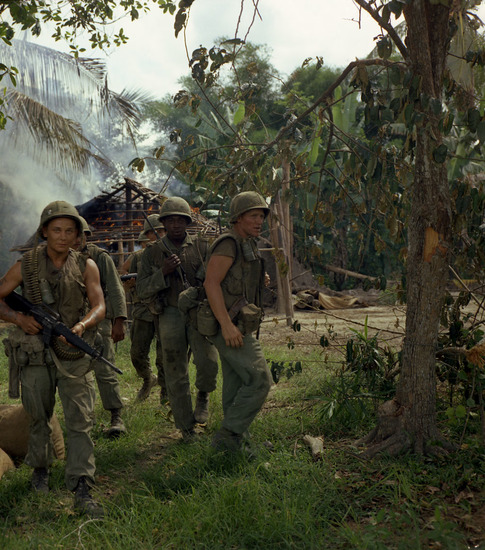 “This exhibit is a reflection of the Vietnam that every American soldier witnessed firsthand—from the jungles to the cities and everywhere in between,” said Museum & Library President & CEO Kenneth Clarke. “And it’s thanks to the extraordinary courage and dedication of the special operations photographers of DASPO that the Museum & Library is able to share their stories with the public.”

First activated by President John F. Kennedy in 1962 with the objective of providing non-biased information to the U.S. Department of Defense, the Department of the Army, the Joint Chiefs of Staff, and the United States Congress, DASPO had a permanent unit stationed in Southeast Asia by 1968. Deploying aboard helicopters, Air Force C-130s, and even non-military aircraft, teams of DASPO photographers operated much like civilian journalists covering the war, but with nearly unlimited access—producing some of the most iconic and important images from Vietnam.

“I’m proud of the men of DASPO with whom I’ve served, and we are grateful to the Pritzker Military Museum & Library for supporting us and giving us the opportunity to inform the American public about who we were as combat photographers and what we and our fellow veterans went through,” said Bill San Hamel, a former captain in the U.S. Army who now serves as president of the DASPO Combat Photographers Association.

San Hamel and fellow DASPO veteran Ted Acheson—each of whom will participate in the Citizen Soldier program along with photographer Dick Durrance—were instrumental in helping to plan and execute the exhibit, raising more than $30,000 to cover operating costs from members and supporters of the association. Additional funds were raised through private donations and a Kickstarter campaign, which remains active.

The Pritzker Military Museum & Library is open to the public and features an extensive collection of books, artifacts, and rotating exhibits covering many eras and branches of the military. Since opening in 2003, it has become a center where citizens and Citizen Soldiers come together to learn about military history and the role of the Armed Forces in today’s society. The Museum & Library is a non-partisan, non-government information center supported by its members and sponsors.