Toys”R”Us® will be the first retailer to debut toys this fall based on DreamWorks Animation‘s upcoming Netflix original series, DINOTRUX. Beginning Thursday, October 1, shoppers will find this all-new line of ferociously fun playthings from Mattel, including playsets, vehicles and more, in Toys”R”Us stores nationwide and online at Toysrus.com. For little fans eager to check out products featuring Ty Rux, Revvit and the rest of the show’s prehistoric pals, select items will be available for pre-order at Toysrus.com beginning this week. 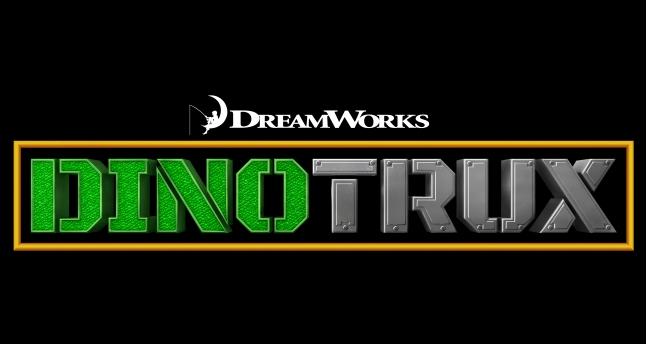 On Friday, August 14, DreamWorks Animation debuted DINOTRUX, an action-packed show based on the award-winning children’s book series by Chris Gall. The show welcomes little ones to a prehistoric world of giant creatures that are half dinosaur and half construction vehicle, including a massive Tyrannosaurus Trux and his best friend, Revvit, a razor-sharp Reptool. The Dinotrux and Reptools come together for the first time ever in the Mechazoic era to build a bigger and better world, while battling against the forces of D-Structs.

DINOTRUX playsets and vehicles from Mattel that will be available exclusively at Toys”R”Us stores nationwide and online at Toysrus.com this fall include: 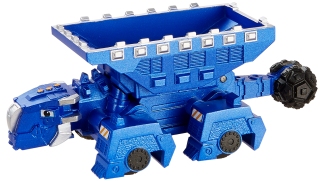 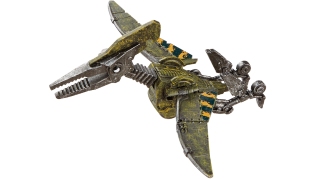 DINOTRUX Mega Chompin™ Ty Rux
Little ones will have a roaring good time with Ty Rux. This half-dinosaur, half-construction vehicle comes to life with kid-activated lights and sounds. Ty Rux encourages interactive play through his many exciting features, including a chomping mouth, swinging wrecking ball tail and large rolling tires. 3 “AA” batteries required (not included). Ages 3 years and up.

DINOTRUX Playset Assortment
These exciting scene packs expand little ones’ prehistoric fun by recreating a key location from the show. Kids can choose from two playsets, each of which comes with a DINOTRUX vehicle and environment specific to that character’s personality and ‘truck-ability’. The Smash & Slide Construction Site features the heroic Ty Rux with his signature wrecking ball tail, complete with hidden plans from Reptool friends. The Rock & Load Skate Park features awesome ramps for the action loving character, Ton-Ton. Each playset has movable parts and accessories that help tell the story of its unique location, making it the perfect place to carry out exciting DINOTRUX construction missions. No batteries required. Ages 3 years and up.

DINOTRUX Construction vs. Destruction Mega Pack™
The half-dinosaur, half-construction vehicle creatures from DINOTRUX have arrived in one ferocious pack. Kids will roar when they find four of their favorite characters featured in authentic detail from the show. Includes twoDINOTRUX vehicles and three Reptools for a multipack that boosts character variety and storytelling possibilities. No batteries required. Ages 3 years and up.

DINOTRUX Diecast Character Assortment
Kids will love this exciting assortment of vehicles, which come in a variety of sizes and characters. Fans can choose from a 2-pack of smaller-scale Reptools or larger mid-size scale characters, including Ty Rux, Garby, Revvit and more, featuring rolling wheels for easy push-around play and movements unique to their on-screen personality and special abilities. Kids will love collecting them all to build out their own prehistoric world of DINOTRUX. No batteries required. Ages 4 years and up.

DINOTRUX Garby
Prehistoric playmates will have a ferociously fun time with Garby, a half-dinosaur, half-construction vehicle creature from DINOTRUX. Garby comes in large-scale so fans can act out the most heavy-duty missions from the show. Kid-powered motion triggers Garby to display unique and humorous movements, like the ability to feed him a piece of ore and then see it shoot out of his backside. Moving him up, down, backward or forward will prompt him to say sounds and phrases. Garby also has rolling wheels for push-around play. 3 LR44 batteries required (included). Ages 3 years and up.

DINOTRUX Pull Back N’ GO
This assortment of prehistoric pals smash, swing and chomp their way to a ferociously fun time. Kids can choose from three of their favorite half-dinosaur, half-construction characters, Ty Rux, Ton-Ton or D-Structs. Each character vehicle comes ready to rumble with rolling wheels and a pullback motor to rev-up the tail-smashing and jaw-chomping action. Kids can collect all three to build out the ultimate prehistoric world of DINOTRUX and their favorite scenes from the show. No batteries required. Ages 3 years and up.

DINOTRUX Revvit
Reptool Revvit is ready to roll into playtime on wheels that mimic his movement from the animated DINOTRUX show. Complete with unique sounds and phrases, he features a tail-activated spinning drill head with interchangeable bits and a measuring tape tongue. 3 “LR44” batteries required (included). Ages 3 years and up.

“We are thrilled to work alongside our partners at DreamWorks Animation and Mattel to be the exclusive destination for this highly anticipated property, bringing the DINOTRUX  line of fun, innovative toys to our customers before they’re available anywhere else,” said Melody Young, Vice President, General Merchandising Manager, Toys”R”Us, U.S. “As the authority on toys, we have the unique ability to bring these kid-favorite characters to life at retail, and will showcase DINOTRUX toys at the front of all our stores nationwide throughout the month of October.”

“Toys”R”Us is the perfect launch partner for DINOTRUX toys, and we are excited to bring the epic adventures of these characters to life onscreen and off,” said Tim Erickson, Global Head of Licensing, DreamWorks Animation. “With Mattel, we’ve developed an awesome range of toys for action-packed playtime that will have kids building and battling alongside this lovable gang of DINOTRUX.“