A new major exhibition exploring the evolution of Norman Rockwell’s Four Freedoms from a series of illustrations into a national movement debuts at the New-York Historical Society this spring as part of an international seven-city tour.

Rockwell, Roosevelt & the Four Freedoms, on view at New-York Historical May 25 – September 2, 2018, showcases Rockwell’s depictions of President Franklin Delano Roosevelt’s Four Freedoms: Freedom of Speech, Freedom of Worship, Freedom from Fear, and Freedom from Want. Organized by the Norman Rockwell Museum in Stockbridge, MA—where the tour culminates in 2020 after traveling to five additional U.S. venues as well as Normandy, France—the exhibition illuminates the historical context for these now-iconic images and examines how Rockwell’s 1943 paintings united the public behind Roosevelt’s call for the defense of universal rights.

The Norman Rockwell Museum is dedicated to education and art appreciation inspired by the legacy of Norman Rockwell. The Museum holds the world’s largest and most significant collection of art and archival materials relating to Rockwell’s life and work, while also preserving, interpreting, and exhibiting a growing collection of art by other American illustrators throughout history. The Museum engages diverse audiences through onsite and traveling exhibitions, as well as publications, arts and humanities programs, and comprehensive online resources.

“Norman Rockwell’s iconic images remind us of the significant role his work played in inspiring Americans to embrace Roosevelt’s call to protect freedom around the world,” said Dr. Louise Mirrer, president and CEO of the New-York Historical Society. “At the same time, Rockwell’s art underscores the enduring importance of Roosevelt’s Four Freedoms speech. What Rockwell and Roosevelt identified as central to human dignity in the era of World War II is equally valid today. We are honored to convey this message to our visitors, and to be the first venue on the Norman Rockwell Museum’s illustrious tour.”

“The Norman Rockwell Museum conceived of Rockwell, Roosevelt & the Four Freedoms both to commemorate the 75th anniversary of the Freedoms and to tell the story of how Norman Rockwell’s paintings came to be among the most enduring images in the history of American art,” said Norman Rockwell Museum Director Laurie Norton Moffatt. “The exhibition provides a rare opportunity to view the Four Freedoms together, outside their permanent home in Stockbridge. As the steward of Rockwell’s legacy, we are thrilled to launch the exhibition at the New-York Historical Society, whose remarkable work explores the relevance of historic events to our lives today.” 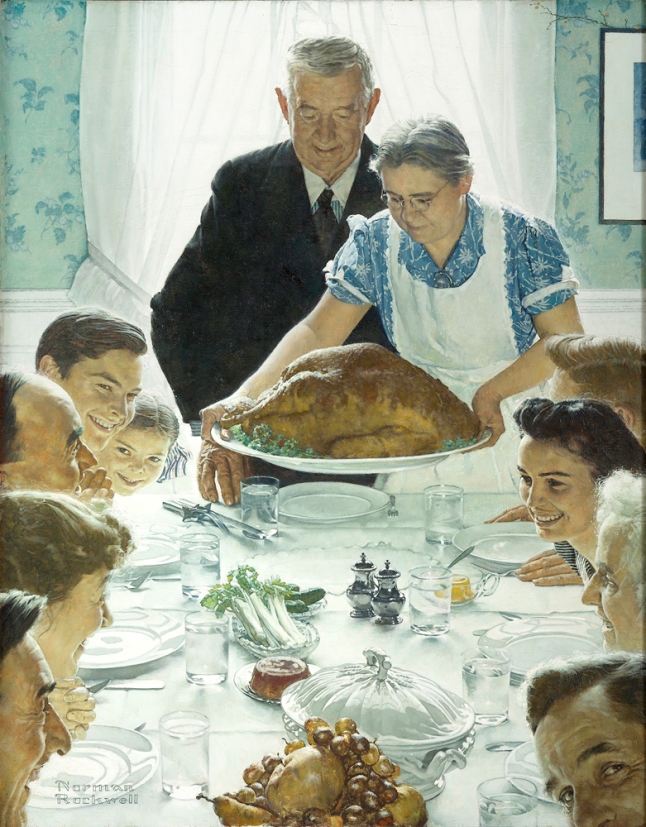 Rockwell, Roosevelt & the Four Freedoms, which is organized into five thematic sections, features paintings, drawings, and other original artworks by Rockwell and his contemporaries, as well as historical documents, photographs, videos, artifacts, interactive digital displays, and immersive settings, some with virtual reality elements. 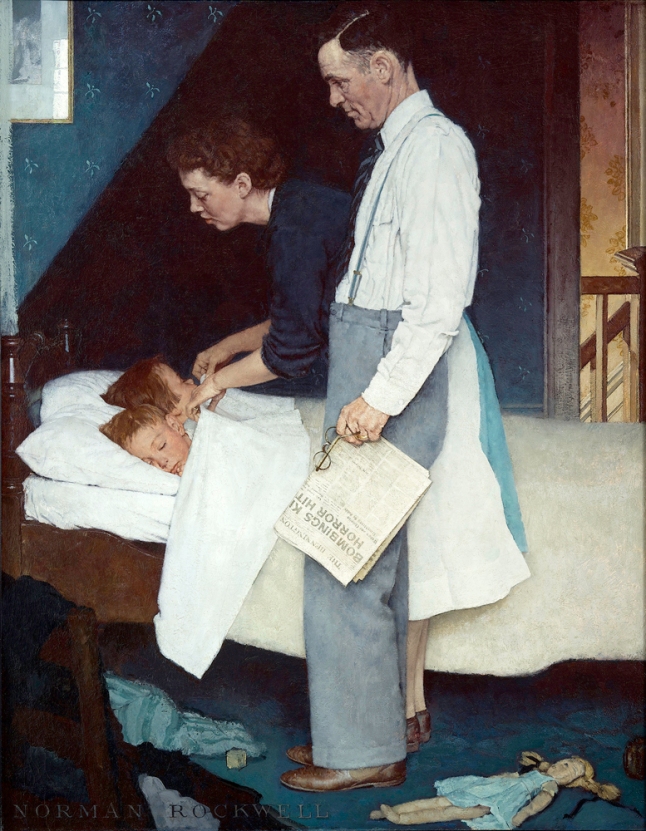 The exhibition opens with The War Generation, a look at the political and socio‐economic backdrop against which President Roosevelt articulated the Four Freedoms. An immersive environment greets visitors with radio clips and film footage from the era, recreating a 1940s living room. A recording of one of Roosevelt’s famous Fireside Chats from April 14, 1938, as well as newsreels and photographs, document the challenges of the Great Depression and the ominous threat of war in Europe and Asia. Also on view are Rockwell’s iconic 1943 artworks Rosie the Riveter—the painting’s only stop on the traveling tour—and Liberty Girl, depicting the important role that American women played during wartime, as well as a selection of J. C. Leyendecker’s increasingly bleak Baby New Year covers for The Saturday Evening Post from 1932–1943.

The second section of the show, FDR’s Freedoms, explores Roosevelt’s proclamation of the Four Freedoms as reasons to enter World War II. Representations of Roosevelt’s handwritten drafts of his 1941 address to Congress, with the idea of the Four Freedoms making its appearance in the fourth version, are on view along with promotional items such as posters, pamphlets, and other ephemera—none of which were able to rally the nation behind the war. This section also includes drawings and published illustrations by Rockwell, such as depictions of the fictional wartime G.I. Willie Gillis.

The third section of the exhibition, Artistic Response to the Four Freedoms Ideals, documents the government’s efforts to promote the ideals to the public by encouraging artists to interpret Roosevelt’s Freedoms, such as stamps in the style of medieval manuscript illuminations by Arthur Szyk. Also on view are propaganda posters, including some by Social Realist artist Ben Shahn, magazine illustrations by Boris Artzybasheff, and Post covers by Mead Schaeffer intended to gain support for the military and the war effort.

The fourth section, Rockwell’s Four Freedoms, explores how the artist’s four paintings—which appeared in sequential issues of the Saturday Evening Post in February and March 1943—came to be embraced by millions. After attending a local town hall meeting at which a man stood up to voice an unpopular view, Rockwell decided to translate the president’s lofty ideals into relatable scenes from daily life. The now-iconic images feature a man speaking up in a town meeting (Freedom of Speech), a group of people of diverse faiths at prayer (Freedom of Worship), a family gathered at the Thanksgiving table (Freedom from Want), and parents tucking their children into bed (Freedom from Fear). In April 1943, the paintings went on a 16‐city tour to promote the sale of war bonds, reaching 1.2 million people and yielding $132 million in sales. In addition to the original paintings, studies for the series, letters from prominent figures and average Americans, posters, photographs, and ephemera from the tour are on view. 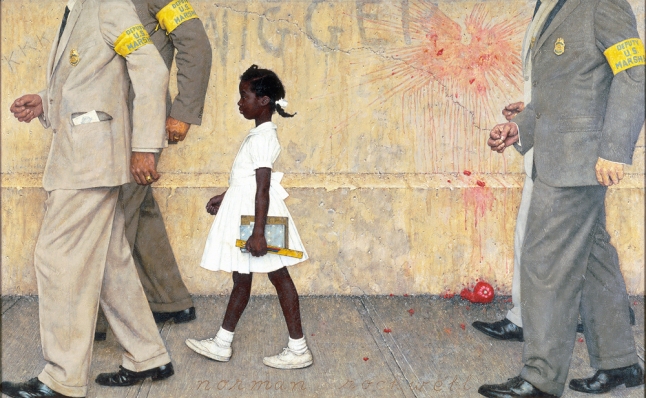 The exhibition concludes with Freedom’s Legacy, highlighting Rockwell’s ongoing focus on human rights and the commonality of mankind. Rockwell envisioned creating a complex composition for the United Nations—which had adopted Roosevelt’s Four Freedoms into its constitution—that would portray members of the Security Council and more than 50 people representing the nations and cultures of the world; a study for this unrealized work and a related painting, Golden Rule (1961), is on view. Also on display are powerful works addressing civil rights, such as The Problem We All Live With (1963), inspired by the story of Ruby Bridges, the first African American child to integrate New Orleans’ William Frantz Elementary School, as well as Murder in Mississippi (1965), depicting the deaths of civil rights activists Michael Schwerner, Andrew Goodman, and James Chaney.

Enhancing the exhibition are a variety of interactive and digital elements. Using Virtual Reality technology, visitors can “jump” into each of Rockwell’s Four Freedom paintings to explore a 1940s house on the American home front (Freedom from Fear), discover Rockwell’s influence on American culture (Freedom from Want), better understand the artist’s process in taking abstract ideas and turning them into images the public could understand and embrace (Freedom of Worship), and attend the Town Meeting depicted in the painting and the civic engagement it inspired (Freedom of Speech). Visitors can virtually turn the pages of the magazine issues in which Rockwell’s Four Freedoms appeared to see the articles, cartoons, and advertisements from 1943. The video Creating Rockwell’s Four Freedoms/War Bonds Show features vintage footage captured by Paramount Pictures and showcases the traveling War Bonds show.

A companion exhibition, Reimagining the Four Freedoms, will be on view at Roosevelt House, Public Policy Institute at Hunter College from May 26 – September 2, 2018. The exhibition showcases a jury‐selected group of contemporary interpretations inspired by of the Four Freedoms and the notion of freedom today, by artists working in a variety of disciplines. Support for the juried exhibition has been provided by the Ford Foundation. (Learn more at http://www.roosevelthouse.hunter.cuny.edu/)

The exhibition is accompanied by a fully illustrated catalogue featuring essays on a range of related cultural and artistic themes by distinguished scholars, curators, and noted public figures. The list of contributors includes: Dr. Kimble and Ms. Haboush Plunkett; Brian Allen, Ph.D., former curator at the Sterling and Francine Clark Art Museum and former director of Addison Gallery of American Art; Allida Black, research professor of history and international affairs at the George Washington University, and founding editor of the Eleanor Roosevelt Papers, a project designed to preserve, teach, and apply Eleanor Roosevelt’s writings and discussions of human rights and democratic politics; Ruby Bridges, American activist known for being the first black child to desegregate the all-white William Frantz Elementary School in Louisiana during the New Orleans school desegregation crisis in 1960; Douglas B. Dowd, professor of art and American culture studies, Washington University in St. Louis;  Stéphane Grimaldi, director, Memorial de Caen, France, where he has served for the past 13 years; Harold Holzer, Jonathan F. Fanton Director of the Roosevelt House Public Policy Institute at Hunter College in New York City; Harvey J. Kaye, Ph.D., professor of democracy and justice studies, University of Wisconsin, Green Bay;  James McCabe, chief collections manager/curator of buildings, the Henry Ford; Lester C. Olson, chair, professor of communication, and Chancellor’s Distinguished Teacher, University of Pittsburgh; Daisy Rockwell, Ph.D., author and granddaughter of Norman Rockwell; Ramón Saldívar, professor of English and Comparative Literature and the Hoagland Family Professor of Humanities and Sciences at Stanford University, who was awarded the National Humanities Medal by President Barack Obama in 2012; Mark R. Schulman, Ph.D., who served as editor-in-chief of the Journal of Transnational Law at Columbia and recipient of the Berger Prize for international law; and Ambassador William vanden Heuvel, chairman emeritus of the Franklin D. Roosevelt Four Freedoms Park, LLC, chairman and chief executive officer of Four Freedoms Park Conservancy, Inc., and founder and chair emeritus of the Franklin and Eleanor Roosevelt Institute. The book will be available from the NYHistory Store.

A slate of public programs adds context to Rockwell, Roosevelt & the Four Freedoms:

On weekends and holidays, special family friendly programs welcome young visitors to explore the exhibition. Colorful family guides make the historical moments, humanities themes, people, and works of art accessible to visitors of all ages—with activities like scavenger hunts, sketching prompts, quizzes, discussion questions, and additional historical content with a focus on youth. On select weekends, Memorial Day, and July 4th, children can meet Living Historians portraying figures from the WWII era, who bring the war front and the home front to life. In August, New-York Historical’s Camp History invites campers to go behind the scenes exploring the exhibition. Rising 6th, 7th, and 8th grade students can explore the history of Roosevelt’s Four Freedoms, Rockwell’s artistic interpretations of them, and examples throughout American history when those ideals have been tested. Campers will create their own Four Freedoms poster series, to be displayed for family and friends at the end of each camp session.

Exhibitions at the New-York Historical Society are made possible by Dr. Agnes Hsu-Tang and Oscar Tang, the Saunders Trust for American History, the Seymour Neuman Endowed Fund, the New York City Department of Cultural Affairs, and the New York State Council on the Arts with the support of Governor Andrew Cuomo and the New York State Legislature. WNET is the media sponsor.

The New-York Historical Society, one of America’s preeminent cultural institutions, is dedicated to fostering research and presenting history and art exhibitions and public programs that reveal the dynamism of history and its influence on the world of today. Founded in 1804, New-York Historical has a mission to explore the richly layered history of New York City and State and the country, and to serve as a national forum for the discussion of issues surrounding the making and meaning of history.