Johnnie Walker Black Label The Director’s Cut is a new, experimental Scotch Whisky created by Beveridge in collaboration with Villeneuve, housed in a unique and futuristic bottle. 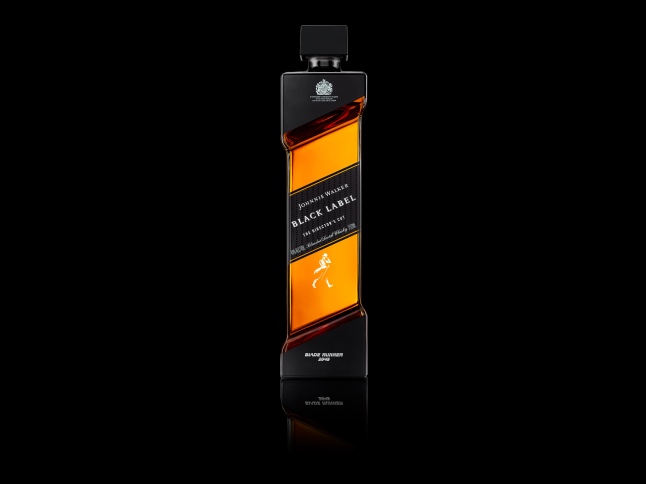 Johnnie Walker Black Label The Director’s Cut is a dark, rich, smooth blend, with sweet fruity vanilla flavors and clouds of smokiness. It is bottled at 49% ABV as a nod to the futuristic period in which Blade Runner 2049 is set.

To celebrate the promotional collaboration surrounding the film, Johnnie Walker has released four digital vignettes featuring Villeneuve, who discusses the project. “Like many fans, I remember the Johnnie Walker bottle from the first film, so it was a unique privilege to collaborate with Johnnie Walker on designing a totally original, custom bottle for the new movie,” he says. “It was also a once-in-a-lifetime experience to help create the limited-edition Director’s Cut blend, which perfectly captures the complex and mysterious world of Blade Runner 2049.”

Beveridge noted, “What we have created in Johnnie Walker Black Label The Director’s Cut is something really special that fans will be able to relate to and whisky drinkers will love. I was truly inspired by Villeneuve’s artistic vision for Blade Runner 2049 and how it could come to life in this new blend. I learned that filmmaking is much like blending–you have to constantly be committed to creating the best possible outcome. Johnnie Walker blending tradition dates back to 1820 and I’m honored to carry on the legacy and collective memory of our other past blenders to ensure that the same whisky enjoyed today can be enjoyed responsibly in 2049.”

Johnnie Walker has also created a series of cocktail videos featuring five innovative Blade Runner 2049-inspired cocktails: The Deckard; Ode to Dreams; Penicillin 2049; Quest; and Ahara. These custom cocktails are prepared by some of the country’s leading bartenders, including Ezra Star and Tenzin Samdo of Boston and Sam Anderson of New York City, giving fans a taste of the upcoming film.

Only 39,000 bottles of Johnnie Walker Black Label The Director’s Cut have been produced and will be available in select countries around the world while supplies last. The rich, smooth blend has aromatic and vanilla flavors, with clouds of smokiness and will be bottled at 49% ABV – a nod to the futuristic period in which Blade Runner 2049 is set.