Rock legends REO SPEEDWAGON and STYX, along with very special guest star DON FELDER—formerly of the Eagles—will join forces for the “United We Rock” U.S. summer tour, which kicks off in Ridgefield, WA on June 20. Produced by Live Nation, tickets for various cities will go on sale starting February 24.

(Check out this video to learn more about the “United We Rock Tour”: https://youtu.be/_ZbGMz6YGFE) 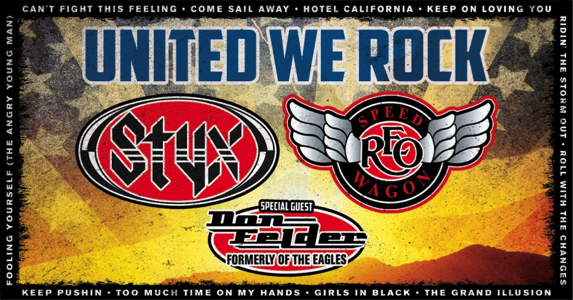 Midwest rock heroes REO Speedwagon and Styx have a rich touring and recording history together. In 2000, the bands recorded a live album and DVD called Arch Allies: Live at Riverport at Riverport Amphitheatre in Missouri. In 2009, the bands embarked on the “Can’t Stop Rockin'” Tour and marked the occasion with a single, “Can’t Stop Rockin’,” co-written by Styx’s Tommy Shaw and REO Speedwagon‘s Kevin Cronin. In 2012 and 2013, REO Speedwagon and Styx hit the road together with the wildly successful “The Midwest Rock ‘n Roll Express” tour.

Most recently, in January, Styx and Don Felder shared the Las Vegas stage for an unforgettable five-night limited engagement, “Styx & Don Felder: Renegades In The Fast Lane,” at The Venetian Theatre inside The Venetian Las Vegas. And, on the Rock Legends Cruise in February, Felder invited REO Speedwagon’s Dave Amato up for an amazing performance of “Hotel California.”

Everyone on the tour is ecstatic to criss-cross the U.S. together again.

“I called up Tommy Shaw last summer and we were both thinking the same thing: let’s get the boys together, make some music, and have some fun. REO Speedwagon and Styx together is a head first plunge into the fountain of youth, an unstoppable force of nature. Add the amazing Don Felder to the mix and it’s a thundering slam dunk!” says Kevin Cronin, REO Speedwagon (vocals, guitars, keyboards) 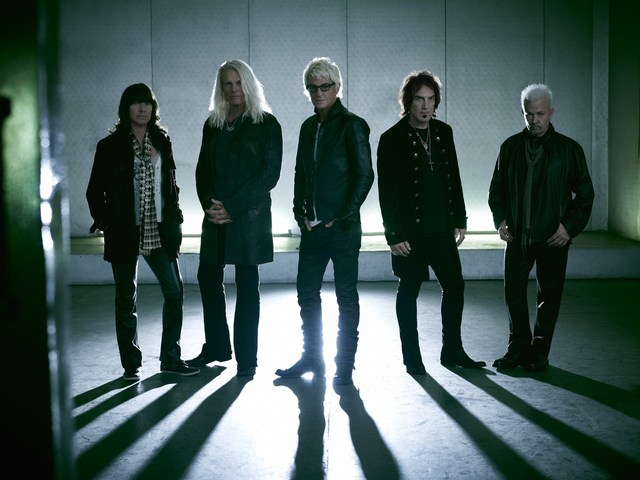 Formed in 1967, signed in 1971, and fronted by iconic vocalist Kevin Cronin since 1972, REO Speedwagon‘s unrelenting drive, as well as non-stop touring and recording, jump-started the burgeoning rock movement in the Midwest. Platinum albums and freeform FM radio staples followed, setting the stage for the release of the band’s explosive Hi Infidelity in 1980, which contained the massive hit singles “Keep On Loving You” and “Take It On the Run,” and spent 15 weeks in the No. 1 slot. To date, REO Speedwagon has sold 40 million albums around the globe, with Hi Infidelity approaching ten times platinum status in the U.S. After nearly five decades since forming, Cronin and bandmates Bruce Hall (bass), Neal Doughty (keyboards), Dave Amato (guitar) and Bryan Hitt (drums) are still electrifying audiences worldwide with concerts featuring their timeless, two number one singles, the aforementioned “Keep on Loving You“, “Can’t Fight This Feeling,” along with hits and fan-favorites including, “Take It on the Run,” “Time for Me to Fly,” “Roll With the Changes,” “Ridin’ The Storm Out,” and more.

“Hitting the road with REO and Don Felder is gonna be an unforgettable evening of music for the fans and another chance to hang with these good time friends of ours who love the life as much as we do.” states Tommy Shaw, Styx (vocals, guitars) 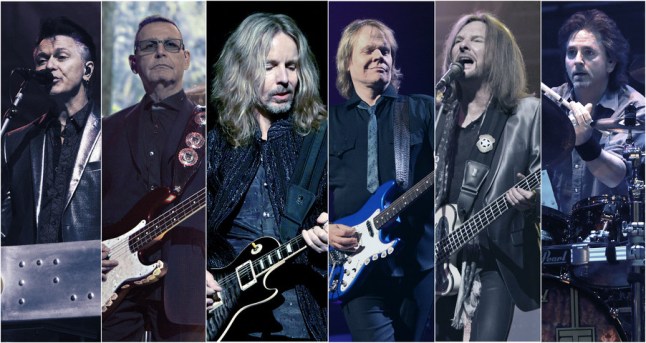 STYX – Tommy Shaw (vocals, guitars), James “JY” Young (vocals, guitars), Lawrence Gowan (vocals, keyboards), Todd Sucherman (drums) and Ricky Phillips (bass), along with the occasional surprise appearance by original bassist Chuck Panozzo—would eventually transform into the virtual arena rock prototype by the late ’70s and early ’80s, due to a fondness for big rockers and soaring power ballads. Over the course of their 40-year career they’ve released 15 studio albums, six best-of compilations and four live albums, garnering eight Top Ten singles. STYX has sold over 30 million albums worldwide. Throughout their illustrious career, they’ve performed more live shows since 1999 than all of the previous years of its career combined. Two Super-Bowl appearances, Pollstar box office chart-topping tours with Def Leppard, Journey, Boston, and Bad Company (to name only a few), two more studio albums. September 2, 2016 marked the long-awaited release date of STYX: LIVE AT THE ORLEANS ARENA LAS VEGAS on DVD, Blu-ray and Digital Formats via Eagle Rock Entertainment. It captures the band performing in July 2014 such fan favorites as: “Too Much Time On My Hands.” “Fooling Yourself (The Angry Young Man),” “Renegade,” and more. It also includes a special surprise visit from Don Felder for a rousing performance of “Blue Collar Man (Long Nights).” It was released on CD July 24, 2015. STYX continues to conquer the planet, one venue at a time.

“Forget politics!!! Since music is the universal language, Styx, REO Speedwagon and Don Felder have a shout out to the universe!!! united we rock!!! At a venue near you this summer!!!” says James “JY” Young (vocals, guitars) 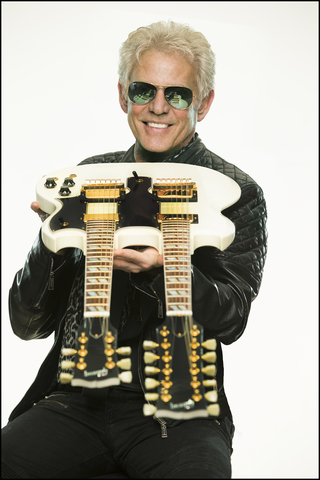 Don Felder, the former guitarist of The Eagles, New York Times best-selling author and four-time Grammy® Award winner—released his second solo album (and first since 1983), Road To Forever, on October 9, 2012 and has been on tour throughout the U.S. ever since. To coincide with the launch of “The Soundtrack of Summer,” the album was re-released with four additional songs, Road To Forever: Extended Edition, via the INGrooves Music Group. Felder’s Road To Forever originally debuted on Billboard’s “Heatseekers” chart at #27. “Girls In Black,” the album’s first single, reached the Top 30 on the Mediabase Rock chart while the second single, “Wash Away,” co-written by Felder and Styx’s Tommy Shaw and featuring Shaw’s signature vocal sound, quickly jumped to #4 on the Mediabase Classic Rock chart. Felder wrote or co-wrote all the songs and performs guitar and lead vocals on the album, which boasts a long list of iconic guest performers including: David Crosby, Graham Nash, Stephen Stills, Steve Lukather, David Paich and Steve Porcaro of Toto, Randy Jackson, Styx’s Tommy Shaw and others. It was produced by Felder along with Robin DiMaggio (Posse 2.0 bandleader on the “Arsenio Hall Show,” United Nations’ Musical Director).

“I’m so excited to be spending the summer on tour with my good friends STYX and REO. It’s going to be a ‘ROCKING’ summer filled with hit after hit and tons of fun for everyone. Come on out and party, dance and sing with us this summer. It’s going to be a blast.” adds Felder