Pendry San Diego is located at 550 J Street, San Diego, in the epicenter of the city’s historic and energetic Gaslamp Quarter, blocks from Petco Park, the home of the San Diego Padres, and the San Diego Convention Center; and is the debut property from Pendry Hotels, a new luxury hospitality brand from Montage International. Located in the city’s renowned Gaslamp Quarter, Pendry San Diego strikes a balance between modern and traditional, pairing classic Southern California influence with luxury amenities. Boasting six unique restaurants and bars and highlighting some of the city’s most talented chefs, Pendry San Diego is the city’s most anticipated new hospitality and lifestyle offering. (For more information, follow @pendryhotels or visit www.pendryhotels.com.) 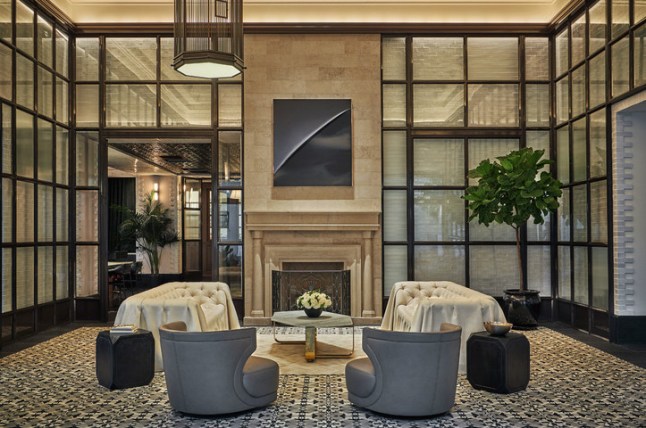 “We are thrilled to debut the first Pendry hotel, Pendry San Diego, in the heart of San Diego’s Gaslamp Quarter,” said Alan J. Fuerstman, founder, chairman, and CEO, Montage International. “San Diego is the ideal city for us to launch the brand and we look forward to welcoming guests and locals alike to experience all that the hotel has to offer.”

“From its early inception, The Pendry vision has been clear,” said Michael Fuerstman, creative director and co-founder, Pendry Hotels. “We wanted to take our extensive experience in hospitality and combine it with our vision of modern-day luxury and style; one that is rooted in local culture, beautiful design, international inspiration and authentic service. It’s a hotel experience that should feel organic and luxurious at the same time and the San Diego property will bring that vision to life beautifully. We are very excited to open our doors in the heart of the Gaslamp Quarter where we think locals and travelers will embrace and appreciate the Pendry point of view.“

Pendry San Diego offers a dynamic hub where guests and visitors can work, relax, socialize and dine in one central location. Rooms are beautifully appointed with custom furnishings, luxurious bathrooms, and a sophisticated yet understated design nod to the city’s beach and surf culture. 36 suites offer stunning views of the city skyline and harbor, the historic streets of the Gaslamp Quarter or direct access to The Pool House outdoor deck. Guests and locals will enjoy a Tom Adler curated pop-up art gallery highlighting Ron Church surf photography. Each space within the hotel is rooted in design, culture and an inspired aesthetic that speaks to San Diego’s unique coastal voice and rapidly growing influence in arts, food, craft beer, and technology.

Fifth & Rose – A sophisticated and chic gathering place with elevated bar fare, Fifth & Rose is the perfect place to engage in conversation over a hand-crafted cocktail. Rich stone stands out amidst a palette of soft pink, green and black with crimson details, candles, and fresh roses. Fifth & Rose is inspired by a host’s living room–comfortable, always welcoming, a place you never want to leave.

Oxford Social Club – Developed by Clique Hospitality, Oxford Social Club is the hotel’s nightlife centerpiece, welcoming guests and locals to enjoy a late-night experience every Thursday, Friday and Saturday night, focused on design, music, service and an extensive, curated cocktail program. Space is intimate and relaxed with banquette seating, plush furnishings, and art installations that all take inspiration from the personal detail and comfort of a private residential setting.

The Pool House – Boasting some of the best views in the Gaslamp Quarter, The Pool House at Pendry San Diego is the hotel’s premier rooftop lounge in partnership with Clique Hospitality, embodying the true essence of the southern California lifestyle with its light, contemporary open-air design, and indoor/outdoor aesthetic. The rooftop, perched above the Gaslamp’s famed 5th Avenue, plays host to relaxed daytime and evening events and gatherings while featuring a signature bar and cocktail experience for poolside guests.

Spa Pendry – A menu of experiences focusing on discovery, modern techniques, and traditional healing practices. From aromatic awakenings and soul nurturing massages to curative baths and meditative bliss, guests can take the time and space they need for relaxation or revival. Spa Pendry‘s signature solutions use native ingredients reminiscent of the healing energies of the sea, aromatic citrus groves, and euphoric herbal concoctions.