All Titles Are Available For Instant Access By Subscribers With Annual And Monthly Subscription Plans Available for SD, HD, and 4K Streaming

John Hendricks, the Founder of CuriosityStream and the Founder and Former Chairman of Discovery Communications, announced today that CuriosityStream, which is currently available in 196 countries worldwide, is launching its first print ad campaign with a theme of positioning the SVOD service as “the antidote to ‘reality’ TV.”

During the week of February 6, 2017, the print campaign will launch in the New York Times, Wall Street Journal and other major newspapers. Concurrent with the print campaign, CuriosityStream has begun to test television commercials designed to increase brand awareness. With commercials currently being tested on networks such as CNN, Fox News, and Bloomberg, the TV campaign has been created around the theme “Long Live the Curious.”

Hendricks stated, “The economic realities of ad-supported linear television have understandably driven most cable networks toward ‘reality’ TV programming which appeals to the large audiences for amusement content. As a result, the curious 25% of television viewers have witnessed a dramatic loss of choice in high-quality programs in science, history, nature, and technology. CuriosityStream is now available worldwide with a mission to satisfy the demand of audiences who are eager to learn about the mysteries of civilization, recent advances in science, fascinating breakthroughs in technology, in-depth explorations of current events, and the wonders of nature.” 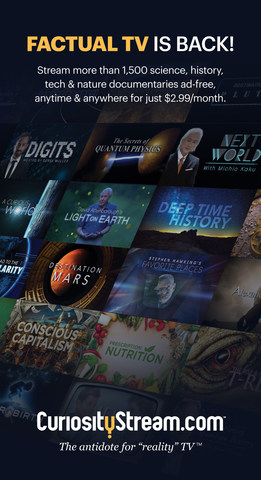 Hendricks continued, “Advanced online video streaming technology combined with the winning consumer economics of a low-cost monthly fee to enjoy ad-free content of choice have together produced the next revolution in television. Pioneered by Netflix, this remarkable video streaming revolution offers consumers a vastly superior means of enjoying great television without commercials and with a staggering choice of content that is instantly available. For example, truly historical documentaries have almost evaporated from linear television. In contrast to perhaps only one or two history documentaries scheduled sometime during the week on cable TV, CuriosityStream currently offers 479 history programs that are instantly available for viewing by subscribers…and that number of choices grows monthly.“

CuriosityStream is the world’s first ad-free, on-demand streaming service for quality documentary and nonfiction programming. Over 1,500 titles from the world’s top factual filmmakers are available to watch on multiple devices — including Roku, Apple TV, Amazon Fire TV, Chromecast, Android and iOS. Monthly subscription prices are $2.99 for SD streaming, $5.99 for HD streaming, and $9.99 for 4K streaming. Focused on offering enriching and enlightening content covering science, technology, history and nature, CuriosityStream was created by John Hendricks (and is an independently-owned service not affiliated with Discovery Communications).

Elizabeth Hendricks North, President and CEO of CuriosityStream, further stated, “We have been amazed at the growth of our subscription base just due to word-of-mouth marketing and a modest level of digital advertising primarily on social networks. We are excited now to begin to tell the world about our quality service through print and television advertising. We know that we have a superior television product and we look forward to securing a substantial share of the 500 million global households that can now stream video. Our objective is serve over 20 million of these high-speed internet households within 10 years.”