Do you want to be a Superhero? At 2016 New York Comic Con, IAmElemental, creator of the first female action figures designed specifically for children, will offer fans of its Series 1/Courage and Series 2/Wisdom figures that opportunity at Booth 1764 from October 6-9, 2016 at the Javits Convention Center.

New York City-based IAmElemental is a privately held toy company creating the first-ever female action figures designed specifically for girls (and boys!). Founded in 2013, the company conducted a Kickstarter campaign in 2014 which was fully funded in two days, drawing backers from all 50 states and six continents, and was named by TIME Magazine as one of the “25 Best Inventions of 2014” and “Top 10 Toys of 2014.”

“At IAmElemental, we believe it’s not Superheroes, it’s Superpowers,” said Chief Elemental Officer Julie Kerwin. “All the Superpowers we could ever want or need are already inside each one of us. We call them the Elements of Power, and they’re coming to Comic Con through our giveaways, limited-edition figure sales, raffles and test-drives of our giant steampunk and Leonardo da Vinci-inspired Exploration’s Wings.” 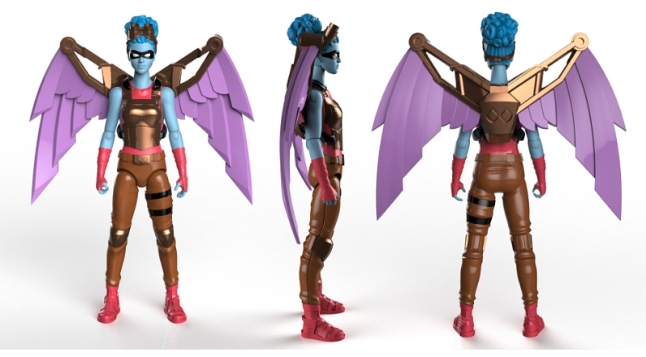 IamElemental envisions kids as the creators of a play experience in which they are the active agents in a story of their own design. The company’s female action figures boast a forward-thinking design and engineering unique among products designed for children. Its Series 1/Courage figures, modeled on Joan of Arc, represent character traits including Bravery, Honesty, Fear, Enthusiasm, Energy, Industry and Persistence. Series 2/Wisdom, with ancient Alexandrian STEM pioneer Hypatia as the muse, includes Creativity, Ingenuity, Curiosity, Logic, Exploration, Mastery and Oblivion. Series 3/Justice will launch in 2017.

“We are honored to have such a close relationship with our fans, and we think our 2016 IAmElemental New York Comic Con experience will bring them even closer to our award-winning female action figures,” said Kerwin. “We’re especially thrilled to offer the opportunity to fly with Exploration’s Wings, fabricated by Jim Henson’s Creature Shop. We look forward to welcoming everyone to Booth 1764.”