Springsteen’s gripping 500-page autobiography, ‘Born to Run,‘ will be released internationally Sept. 27, published in hardcover, e-book, and audio editions by Simon & Schuster in the United States, United Kingdom, Canada, Australia, and India, as well as other publishers around the world. Springsteen has been privately writing the autobiography over the past seven years. He began working on the book in 2009, after performing with the E Street Band at the Super Bowl’s halftime show. (‘Born To Run‘ is available for pre-order here: http://smarturl.it/borntorunbook.)

‘Chapter and Verse,’ the audio companion will be released Sept. 23 on Columbia Records. Five of the album’s 18 tracks have not been previously released.

Springsteen selected the songs on ‘Chapter and Verse‘ to reflect the themes and sections of ‘Born to Run.’ The compilation begins with two tracks from The Castiles, featuring a teenaged Springsteen on guitar and vocals, and ends with the title track from 2012’s ‘Wrecking Ball.’ The collected songs trace Springsteen’s musical history from its earliest days, telling a story that parallels the one in the book.

Recordings from Steel Mill and The Bruce Springsteen Band feature musicians who would go on to play in The E Street Band. Solo demos of “Henry Boy” and “Growin’ Up” were cut in 1972 shortly before Springsteen began recording his debut album, ‘Greetings From Asbury Park, N.J.’

1. Baby I — The Castiles (recorded May 2, 1966, at Mr. Music, Bricktown, NJ; written by Bruce Springsteen and George Theiss; previously unreleased)

2. You Can’t Judge a Book by the Cover — The Castiles (recorded Sept. 16, 1967, at The Left Foot, Freehold, NJ; written by Willie Dixon; previously unreleased)

All songs written and performed by Bruce Springsteen except as noted.

‘Chapter and Verse‘ will be available as a single CD and double LP, as well as via digital download and streaming. The package will include lyrics and rare photos.

Bruce Springsteen and the E Street Band are currently on tour in Europe and will return to the U.S. for a string of dates beginning Aug. 23 at MetLife Stadium in East Rutherford, NJ, and ending Sept. 14 at Gillette Stadium in Foxborough, MA.

On Thursday, July 28, the Estate of Michael Jackson teamed up with Michael Jackson ONE by Cirque du Soleil and Mandalay Bay to pay tribute to the King of Pop as they unveiled his iconic HIStory Statue. Featured on the cover of his world-famous album HIStory: Past, Present and Future Book 1, which became the best selling multiple disc album worldwide, the HIStory Statue is the third piece of memorabilia to be loaned by the Estate for display on the Mandalay Bay property. 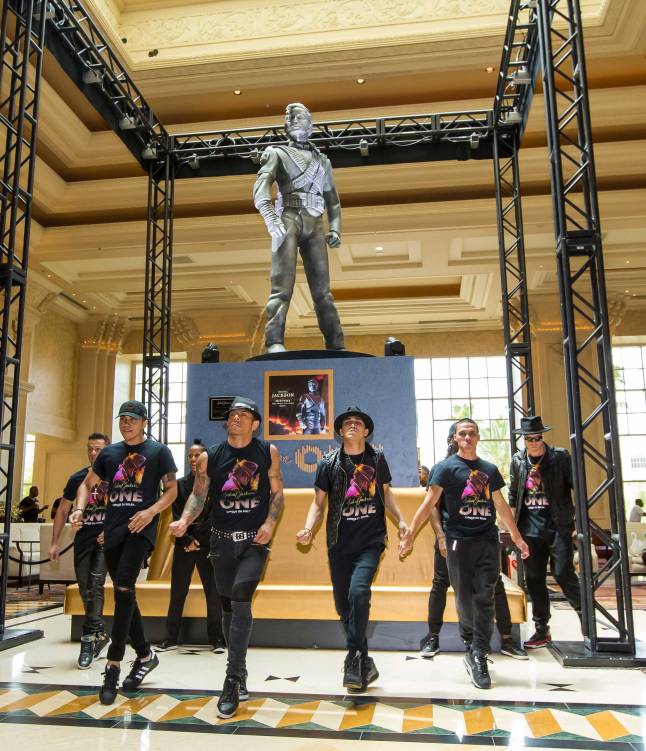 The highly anticipated unveiling ceremony took place in the Main Lobby of Mandalay Bay, where fans had the opportunity to witness the live reveal of this historic sculpture. To welcome the piece, members from the cast of Michael Jackson ONE delivered a never-before-seen performance created especially for this event, dazzling the audience as they performed to “SCREAM,” the first single from the HIStory album. Following the performance, fans were able to meet and take photos with those cast members.

“There’s a reason why Michael Jackson’s spirit still lives on,” said Jerry Nadal, Senior Vice President, Resident Shows Division at Cirque du Soleil. “It’s the passion and love behind every song he created. It’s the soundtrack he delivered to an entire generation and beyond. We certainly see this every night at Michael Jackson ONE as thousands of Michael Jackson, Cirque and music and dance fans of all ages and backgrounds collide to experience their favorite Michael Jackson songs in a new and innovative way. Now, this incredible statue stands with us as a testament to his legacy.” END_OF_DOCUMENT_TOKEN_TO_BE_REPLACED

Maroon 5‘s remarkable 14-year career has established them as one of pop music’s most enduring and celebrated groups. For the first time since their original release, all five of the band’s albums will be released on 180-gram vinyl in a limited edition box set: Maroon 5: The Studio Albums and as individual titles on vinyl, September 30—just as the band wraps up its year-long Maroon 5 World Tour of 37 cities in October. All LPs will include original cover artwork.

It Won’t Be Soon Before Long was released on A&M/Octone on May 16, 2007, debuting at No. 1 on the Billboard 200 (and in the U.K.), with Matt Flynn replacing drummer Ryan Dusick, who still received credit on the album as Musical Director. The album’s musical direction veered into a pop-punk-soul area, drawing inspiration from the likes of Talking Heads, Michael Jackson and Prince. The album’s first single, “Makes Me Wonder,” turned into the band’s first-ever Billboard Hot 100 chart-topper, going to No. 2 in the U.K., while “Wake Up Call” hit the Top 20. The album went on to sell 5 million copies worldwide, hitting No. 1 on Billboard‘s Digital Albums chart, No. 3 on the Top Alternative Albums tally, No. 3 on Top Catalog Albums and No. 1 on the Top Tastemaker Albums.

Hands All Over was first released on A&M/Octone Records on August 18, 2010, then re-released a year later to include their chart-topping, GRAMMY®-nominated hits “Moves Like Jagger” and “Misery.” Produced by Mutt Lange, with Benny Blanco and Shellback producing “Moves Like Jagger,” the album debuted at No. 2 and was certified platinum. “Moves Like Jagger,” which was first performed live on The Voice by fellow judges Adam Levine and Christina Aguilera, turned into one of the band’s most successful single releases, nominated for a GRAMMY® in the Best Pop Duo/Group Performance category (as was “Misery“). The single is one of the eight best-selling digital downloads of all time, with sales of more than 8.5 million copies worldwide in 2011 and another 7 million since then.

Overexposed was released on June 20, 2012, on A&M/Octone Records, and is the band’s only album not to feature multi-instrumentalist Jesse Carmichael, who left the band and returned two years later. PJ Morton, who had been touring with the band as the keyboardist and background vocalist, joined the group. Working with a new set of producers, including hitmeister Max Martin and Ryan Tedder – as well as mainstays Shellback and Benny Blanco – Maroon 5’s fourth album debuted at No. 2 on the Billboard 200. The album has since sold nearly 1.5 million copies in the U.S., spurred by the lead single, “Payphone,” featuring Wiz Khalifa, which went to No. 2 on the Billboard Hot 100, and “One More Night,” which peaked at No. 1. Both subsequent singles, “Daylight” (No. 7) and “Love Somebody” (No. 10) also scored high on the charts.

V, released August 29, 2014, their first for 222/Interscope, marked the return of multi-instrumentalist Jesse Carmichael, while debuting at No. 1 on the Billboard 200 and producing three hit singles in “Maps” (No. 6—setting a record for the highest debut by a group on the Top 40 radio charts in 18 years), “Animals” (No. 3) and GRAMMY®-nominated “Sugar” (No. 2). The album also features a collaboration with fellow Voice judge Gwen Stefani, “My Heart Is Open,” co-written with Sia Furler. Rolling Stone called the album “precision-tuned and lustrously polished, jammed with hooks and choruses that build a man cave in your brain.”

While Celebrating The Release Of Her Latest Musical Adventure –A Country Album– Pop Icon Cyndi Lauper Shares Her Secrets For Reinvention And Why Rules, Especially About Aging, Just Don’t Apply

With nearly 36 million readers, AARP The Magazine, founded in 1958 and is published bimonthly in print and continually online, is the world’s largest circulation magazine and the definitive lifestyle publication for Americans 50+. It delivers comprehensive content through health and fitness features, financial guidance, consumer interest information and tips, celebrity interviews, and book and movie reviews. AARP The Magazine was.

At age 63, Cyndi Lauper is still that girl with edge who just wants to have fun. She remains an entertainment powerhouse whose secret to success is not giving a “hoot,” remaining true to herself and her unconventional artistic vision.

In the August/September issue of AARP The Magazine, a pink-haired Lauper opens up about her personal life, including an abusive childhood, and provides details about her remarkable career, spanning pop rock, new wave, blues, Broadway and, most recently, a recording of country standards.

Her notable work doesn’t end with music, but includes forays into acting, performance art, and human rights activism. This 80s icon is a devoted wife, mother and musical artist that has survived personal and professional hardships and is fiercely determined to remain open to the new and to be defined only by herself.

The following are excerpts from the August/September issue of the AARP The Magazine cover story featuring Lauper, available in homes today and online now at www.aarp.org/magazine/.

ON BEING TRUE TO HERSELF AND STAYING POWER: “Don’t listen. I find it remarkable when the ‘industry people’ try to pigeonhole you, like they know. Even me, I don’t know what I can do. I want to be great, but I don’t know if I can be great, so I just have to keep trying.”

“You can’t live your whole life worrying about staying famous. If losing some fame means doing what you want, you gotta go with what you want.”

“They can say what they want [about my legacy]. They’ve been saying everything anyway. I don’t give a hoot. I am who I am. I don’t apologize for any of it. But I do hope that what I do in my art inspires people—that it makes ’em happy and makes ’em think.“

“I wouldn’t listen to the naysayers and haters. Who cares? The people who succeed are the people who don’t quit.”

“I wanna hear everything and keep learning about music. If I’m gonna invest my time, I want it to be great, because that’s what I’m leaving behind, besides the human beings I adore.”

“I had a dream one time. I climbed the ladder and then let the ladder fall because I couldn’t just stand where I was. I wanted to be my own artist, to sing the rhythm of my own speech.”

ON THE VIRTUES OF AGING THE WAY YOU WANT TO: “Age has nothing to do with it. You’ll get wherever it is you want to go at whatever time in your life you want to do it.“

“I think I have reached an age when I can have pink hair if I want—or blue hair. But blue, it turns a little green, so right now I am going with the pink.”

ON HER FINANCIAL REGRETS: “I was never smart about money like Prince. I wish I wasn’t taken advantage of so much.”

ON LEARNING TO BELIEVE IN YOURSELF: Lauper’s manager told her, “You’ll never be as big as you were.” Yet she refused to fire him. “Why didn’t I say, ‘If you don’t believe in me, you shouldn’t be working for me’? I couldn’t. He had a family. And I guess there were times I didn’t think I was worthy either, because I was always told I was a pain in the ass, and why can’t I just stand there and sing?“

ON HER ASPIRING HIP-HIP ARTIST SON’S REFUSAL TO TAKE HER ADVICE: “I love my kid so f—ing much, I can’t take it.” Yet for Lauper, the main issue at the moment is that, though her son is an aspiring hip-hop artist, he refuses to take her advice. Still, she’s sanguine. “I‘d get mad when people gave me advice, too. I still do. I’ll ask my husband what he thinks of what I’m wearing, and he’ll say, ‘I don’t really like it,’ and I’ll wear it anyway. So why ask the poor bastard?“

ON A NORTH CAROLINA LAW BANNING TRANSGENDER FROM USING THE FACILITY WITH WHICH THEY IDENTIFY: “Where I come from, you don’t let your friends and family be stripped of their civil rights.” But unlike other artists, including Bruce Springsteen, who canceled their concerts in the state, Lauper went ahead with her Raleigh, North Carolina show and donated the proceeds to a local LGBT charity. “Just my money,” she adds quickly. “Set people, electricians—all those guys need to get paid.“