Conducted by Yannick Nézet-Séguin and Directed by Bartlett Sher, Aleksandrs Antonenko, One Of The World’s Leading Interpreters of Otello, Sings His First Met Performances Of The Role, Opposite Sonya Yoncheva as Desdemona and Željko Lučić as the Villainous Iago

Verdi’s late masterpiece based on Shakespeare’s tragic drama of jealousy and deceit, Otello, airs on THIRTEEN’S Great Performances at the Met Sunday, February 21 at 12 p.m. on PBS. (Check local listings.) (In New York, THIRTEEN will air the opera at 12:30 p.m.)

Also featuring Željko Lučić as Otello’s sinister rival, Iago, Dimitri Pittas as Cassio, and Günther Groissböck as Lodovico, this staging also marks the Met debut of set designer Es Devlin, whose previous designs include the 2014 revival of Machinal on Broadway and numerous opera productions for Covent Garden, La Scala, and other leading companies.

Otello was originally seen live in movie theaters on October 17, 2015 as part of the groundbreaking The Met: Live in HD series, which transmits live performances to more than 2,000 movie theaters and performing arts centers in over 70 countries around the world. The Live in HD series has reached a record-breaking 18 million viewers since its inception in 2006. 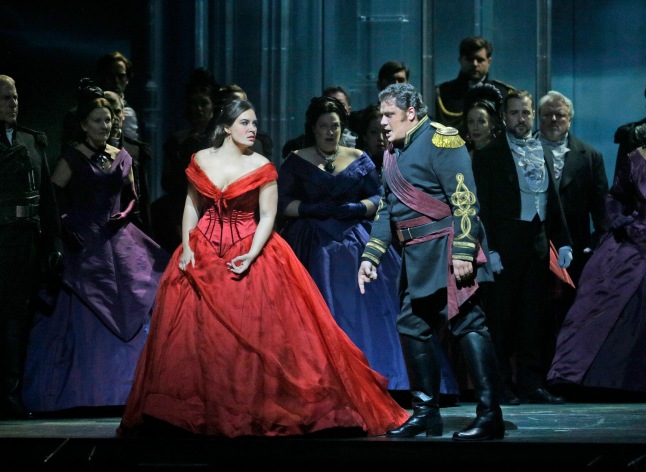 Sonya Yoncheva as Desdemona and Aleksandrs Antonenko in the title role of Verdi’s “Otello”. Photographed by Ken Howard/ Metropolitan Opera

Often cited as Italian opera’s greatest tragedy, Otello is a miraculous union of music and drama, a masterpiece as profound philosophically as it is thrilling theatrically. Shakespeare’s tale of an outsider, a great hero who can’t control his jealousy, was carefully molded by the librettist Arrigo Boito into a taut and powerful opera text. Otello almost wasn’t written: following the success of Aida and his setting of the Requiem mass in the early 1870s, Verdi considered himself retired, and it took Boito and publisher Giulio Ricordi several years to persuade him to take on a major new work.

Cyprus, late 19th century. During a violent storm, the people of Cyprus await the return of their governor and general of the Venetian fleet, the Moor Otello. He has been fighting the Muslim Turks and guides his victorious navy to safe harbor. In his absence, the young Venetian Roderigo has arrived in Cyprus and fallen in love with Otello’s new wife, Desdemona. Otello’s ensign Iago, who secretly hates the governor for promoting the officer Cassio over him, promises Roderigo to help win her. While the citizens celebrate their governor’s return, Iago launches his plan to ruin Otello. Knowing that Cassio gets drunk easily, Iago proposes a toast. Cassio declines to drink, but abandons his scruples when Iago salutes Desdemona, who is a favorite of the people. Iago then goads Roderigo into provoking a fight with Cassio, who is now fully drunk. Montano, the former governor, tries to separate the two, and Cassio attacks him as well. Otello appears to restore order, furious about his soldiers’ behavior. When he realizes that Desdemona has also been disturbed by the commotion, he takes away Cassio’s recent promotion and dismisses everyone. Otello and Desdemona reaffirm their love.

Iago advises Cassio to present his case to Desdemona, arguing that her influence on Otello will secure his rehabilitation. Alone, Iago reveals his bleak, nihilistic view of humankind. He makes dismissive remarks about Desdemona’s fidelity to Otello, whose jealousy is easily aroused. Otello’s suspicious are raised when Desdemona appears and appeals to him on Cassio’s behalf. Otello evasively complains of a headache, and Desdemona offers him a handkerchief, which he tosses to the ground. Emilia, Iago’s wife and Desdemona’s maidservant, retrieves it, and Iago seizes the handkerchief from her. Left alone with Otello, Iago fans the flames of the governor’s suspicions by inventing a story of how Cassio had spoken of Desdemona in his sleep, and how he saw her handkerchief in Cassio’s hand. Seething with jealousy, Otello is now convinced that his wife is unfaithful. The two men join in an oath to punish Cassio and Desdemona.

Iago’s plot continues to unfold as he tells Otello that he will have further proof of his wife and Cassio’s betrayal. When, moments later, Desdemona approaches Otello and once again pleads for Cassio, Otello again feigns a headache and insists on seeing the missing handkerchief, which he had once given her as a gift. When she cannot produce it, he insults her as a whore. Alone, he gives in to his desperation and self-pity. Iago returns with Cassio, and Otello hides to eavesdrop on their conversation, which Iago cleverly leads in such a way that Otello is convinced they are discussing Cassio’s affair with Desdemona. Cassio mentions an unknown admirer’s gift and produces the telltale handkerchief—in fact planted by Iago in his room. Otello is shattered and vows that he will kill his wife. Iago promises to have Roderigo deal with Cassio.

Aleksandrs Antonenko in the title role and Dimitri Pittas as Cassio in Verdi’s “Otello”. Photographed by Ken Howard/ Metropolitan Opera

A delegation from Venice arrives to recall Otello home and to appoint Cassio as the new governor of Cyprus. At this news, Otello loses control and explodes in a rage, hurling insults at Desdemona in front of the assembled crowd. He orders everyone away and finally collapses in a seizure. As the Cypriots are heard from outside praising Otello as the “Lion of Venice,” Iago gloats over him, “Behold the Lion!”

Emilia helps the distraught Desdemona prepare for bed. She has just finished saying her evening prayers when Otello enters and wakes her with a kiss to tell her he is about to kill her. Paralyzed with fear, Desdemona again protests her innocence. Otello coldly strangles her. Emilia runs in with news that Cassio has killed Roderigo. Iago’s plot is finally revealed and Otello realizes what he has done. Reflecting on his past glory he pulls out a dagger and stabs himself, dying with a final kiss for his wife.

When the production opened the Met’s current season, The New York Times noted, “[Sonya] Yoncheva is poised for a major career… Her luscious sound has just enough of an earthy tinge and texture to balance the shimmer of her singing,” adding, “What other soprano right now can sing the ‘Willow Song’ and ‘Ave Maria’ more beautifully?“

The Financial Times judged the production to be “a serious and compelling effort with a magnificence worthy of the Met… Conductor Yannick Nézet-Séguin led a performance of cracking authority.“

And The Washington Post found it to be “a compelling and sensitive reading of Verdi’s score that never lost its focus on the narrative and emotional arc of the story while mining the depths of this beautiful, shifting, chiaroscuro music.”

Great Performances at the Met is a presentation of THIRTEEN Productions LLC for WNET, one of America’s most prolific and respected public media providers.

Corporate support for Great Performances at the Met is provided by Toll Brothers, America’s luxury home builder®. Major funding for the Met Opera presentation is provided by the National Endowment for the Arts. This Great Performances presentation is funded by the Irene Diamond Fund, the Anna-Maria and Stephen Kellen Arts Fund, The Philip and Janice Levin Foundation, The Agnes Varis Trust, and public television viewers.