Waterhouse & Dodd (960 Madison Avenue, New York, NY, 10021) will present an exhibition benefiting the Michael J. Fox Foundation, December 10, 2015 – January 9, 2016, which has supported the fight against Parkinson’s so dynamically since 2000 by raising over $450 million. A portion of all sales from the exhibition will contribute to the Foundation. The Michael J. Fox Foundation is dedicated to finding a cure for Parkinson’s disease through an aggressively funded research agenda and to ensure the development of improved therapies for those living with Parkinson’s today. A portion of sales resulting from the exhibition will be donated to support research for the treatment and cure of Parkinson’s disease.

Paintings, drawings and photographs of 5 artists represented by Waterhouse & Dodd will be featured. Two of these artists – Tom Shannon and Jay Zukerkorn – have Parkinson’s.

Jay Zukerkorn was diagnosed in 2004. Born in Hawaii, Zukerkorn has been a successful commercial photographer for 25 years and Waterhouse & Dodd is the first gallery to showcase his fine art endeavors. Zukerkorn’s first series Movement Disorder began as a response to his initial diagnosis, as he accentuated his condition by deliberately blurring the images in bright, colorful beach scenes. In his new series, The Road I Am On, the photographs appear abstract, highlighting the contrast between dark pavements and bright, crackled paint. The series is another leg of his journey through artistic reinvention and rediscovery.

END_OF_DOCUMENT_TOKEN_TO_BE_REPLACED 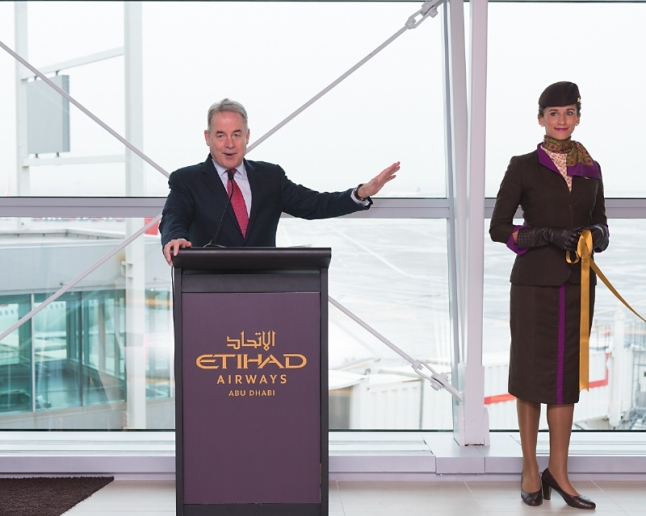 James Hogan, President and Chief Executive Officer of Etihad Airways, the national airline of the United Arab Emirates (UAE), officially opened the airline’s First and Business Class Lounge at JFK International Airport this past week. The new lounge is the second in the United States to join the airline’s collection of premium lounges offered worldwide for its guests. 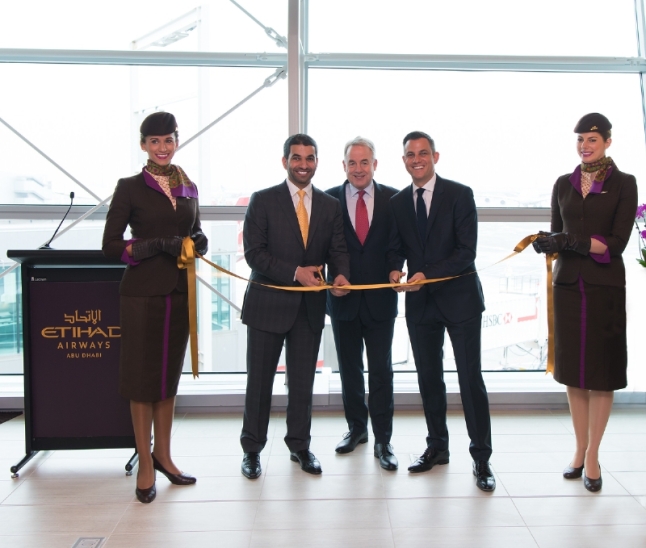 Mr. Hogan said, “The opening of Etihad Airways’ new First and Business Class Lounge at New York’s JFK International Airport reinforces our commitment to investing in the travel experience and providing our guests with the highest levels of comfort, luxury and world-class hospitality at every point in their travel journey – on the ground and in the air.” END_OF_DOCUMENT_TOKEN_TO_BE_REPLACED

Etihad Airways, the Abu Dhabi-based national airline of the United Arab Emirates, was tonight named Airline of the Year 2016 by the prestigious US-based aviation industry publication Air Transport World (ATW). Air Transport World is an authoritative monthly magazine serving the needs of the global airline and commercial air transport manufacturing communities. Its renowned editors have been nominated for nearly every major aviation journalism award available thanks to their balanced coverage of the airline industry and incisive reports on trends.

ATW‘s Airline Industry Achievement Awards were created in 1974 to recognize excellence across a broad range of airline operations and are widely considered as the most coveted in the aviation industry. The magazine is based in the United States with an editorial team that reaches across the world.

Etihad Airways was chosen for the top honor by ATW‘s editorial board in a highly contested competition, with entries from more than 100 airlines around the world. The award recognizes Etihad Airways’ clear vision; its successful organic growth supplemented by a unique partnership strategy; its commercial focus which has delivered net profits in each of the last four years; the rapid growth of its highly motivated workforce; its development of innovative products and services, including The Residence by Etihad(TM); and the airline’s strong executive leadership.

Air Transport World Editor-in-Chief Karen Walker said: “I am absolutely delighted to recognise Etihad Airways as ATW’s Airline of the Year 2016. In a fiercely competitive market where much ends up looking the same, James Hogan and his team prove that you can set your airline apart through innovative thinking, creative customer products and a fierce adherence to delivering against a clear vision. I congratulate Etihad Airways for a most deserving achievement.“

News of the award was announced during a reception hosted in New York this evening by Etihad Airways to mark the arrival of its award-winning Airbus A380 daily service from Abu Dhabi to America’s financial capital.

Etihad Airways began operations in 2003, and in 2014 carried 14.8 million passengers. From its Abu Dhabi base, Etihad Airways flies to or has announced plans to serve 116 passenger and cargo destinations in the Middle East, Africa, Europe, Asia, Australia and the Americas. The airline has a fleet of 120 Airbus and Boeing aircraft, and more than 200 aircraft on firm order, including 66 Boeing 787s, 25 Boeing 777Xs, 62 Airbus A350s and five Airbus A380s.

Etihad Airways was recognized by ATW’s editorial board for “fast but thoughtful growth, consistently delivering against its targets and always thinking ahead.” The airline was also applauded for its “excellent numbers on financials, cargo and safety”; and its unique partnership strategy that was paying dividends; a willingness to be bold in equity tie-ups, boosting the number over the past 12 months to include Etihad Regional and Alitalia; and its strategy of developing ground-breaking strategic contracts with suppliers.

James Hogan, Etihad Airways President and Chief Executive Officer, said: “I am pleased to accept this award on behalf of the 27,000 employees of the Etihad Airways group around the world. I applaud their commitment, dedication and hard work in pursuit of our goal to be the world’s best airline.”

ATW also spoke highly of Etihad Airways’ “consistently diplomatic, dignified and assured response to attacks by US airlines on Gulf carriers” in which Etihad Airways had developed a powerful defence of its business model and strategy. ATW said Etihad Airways’ executive team, led by President and Chief Executive Officer, James Hogan, had maintained the high road and, in doing so, demonstrated industry leadership beyond the company mandate.

Hogan added: “There have been attacks on our business model but we have chosen to let our service, our routes and our competitive offer do the talking. Etihad Airways is not about being the biggest – it is about being the best. It has been a long road to success but we have shown it is possible to change the aviation landscape. I thank ATW for this award, the most highly-regarded in our industry.”

Mr Hogan said Etihad Airways constantly shifted the goalposts in service and product offerings, as demonstrated by last week’s arrival of the airline’s first US service featuring its award-winning Airbus A380, now flying to New York’s JFK International Airport. The A380, which made its US debut on 23 November, features The Residence by Etihad – the commercial airline industry’s only three-room suite with its own butler. And this week, Etihad Airways opened a new lounge for First and Business Class passengers at JFK International Airport – the airline’s second premium facility in United States – reinforcing its commitment to investing in the guest travel experience on the ground. (See next post for more details.)

Over the past 12 months, Etihad Airways also launched its new Boeing 787 Dreamliners – the first of 71 on order – and inducted the first of 10 Airbus A380 aircraft into its fleet.

The airline launched six new routes on three continents during 2015, taking its global network of destinations to 116 with a fleet of 120 aircraft. More than 17 million guests are expected to travel on Etihad Airways by the end of 2015, up from almost 15 million last year, while the airline maintains its focus on profitability.

The Airline of the Year award will be presented at a Gala Dinner at the 42nd edition of the annual ATW Airline Industry Achievement Awards taking place during the Singapore Air Show on 15 February 2016.

Farting Butt Ornaments, Man Sacks, And Potty Pianos Are Just Some Of The “stupid” Gifts That Made Stupid.com‘s 9th Annual List Of The Top 10 Most Stupid Gifts Of The Year. 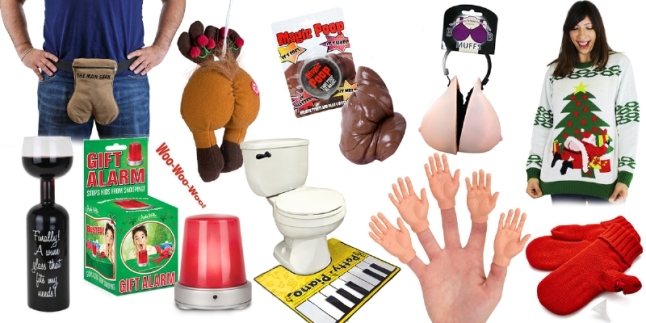 The Top 10 Stupid Gifts of 2015, from Stupid.com Farting reindeer butt ornaments, man sacks, potty pianos and wine bottle glasses are just some of the “stupid” gifts that made Stupid.com’s 9th annual list of the the most ridiculous gag gifts of the year. (PRNewsFoto/Stupid.com)

Each year, Stupid.com searches the world for the most ridiculous gag gifts to elicit laughter and shock, spreading laughs online since 1998. From funny Christmas gifts to stocking stuffers, the company offers a diverse selection of over 4,000 products in 120 gift categories. It’s wacky, bizarre, and most of all, really stupid. It’s the 9th annual list of the Top 10 Most Stupid Gifts of the Year. Here are the Top 10 Stupid Gifts of 2015 listed in no particular order: 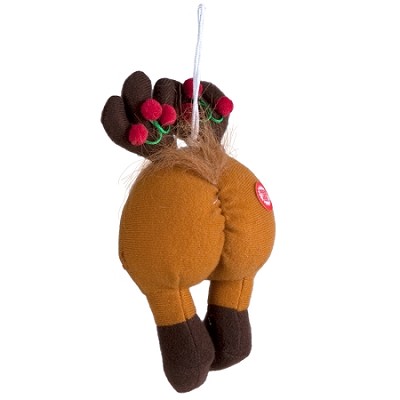 Farting Reindeer Butt Ornament
This musical decoration toots out classic carols as it hangs from any tree. Did anyone hear that buck snort? 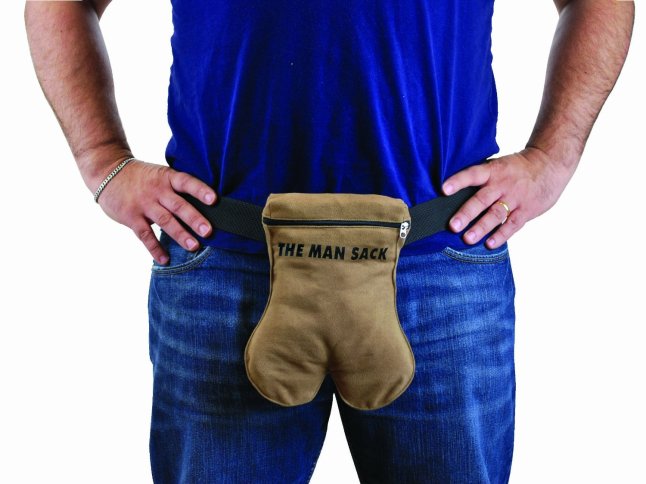 Protect the valuables by going ballsy with this testicular-shaped fanny pack for men that holds everything except the family jewels themselves. This awesome Fanny Pack is perfect for storing keys, wallets, and everything else a Man carries in his daily life. No one will ever question the power and importance of your Man Sack, in fact most people will be quite impressed. The Sack has a zipper opening and can store many of your belongings for extremely easy access. Don’t call it a Fanny Pack, call it a Fanny Sack.

The Wine Bottle Glass
This giant glass is the perfect size to hold an entire bottle of wine, and a great way to maintain a festive buzz during extended holiday gatherings.

Have we got the most bizarre Ear Muffs for you! Busty-shaped earmuffs aren’t great for silencing your uncle’s dirty Christmas jokes. They are, however, the breast way to keep warm all winter long. These “Booby” Ear Muffs will keep your Ears warm and perky all winter long. Say it’s not winter? Well, they’ll just keep your Ears perky, and that’s good enough for a lot of us. You’ll definitely have eyes all over perked up when you step out in this winter accessory. Best thing about these Ear Muffs is they keep your Ears insulated and warm with soft black interior padding. They may be bizarre but functional they are.

Potty Piano
It’s bathroom Beethoven with this clever keyboard that fits snugly around the toilet and add some jingle to any tinkle.

Mitten Flask
This cozy set of knit gloves, which feature a secret spigot with a pouch for your favorite beverage, are perfect for storing some holiday cheer.

Finger Hands
Get hands-y at your holiday party by wearing these freaky finger puppets shaped like a tiny hand. Hey dude, did you ever wonder what it would look like if your fingers had tiny hands on the end as if they were arms? It’s a freakout! These irresistible soft vinyl finger puppets fit snugly on the end of your finger and look like a tiny right hand. If you buy five to put a full set on your hand, you can give a high twenty-five.

The Gift Siren
Put this miniature alarm on any gift to stop snoopers with a motion-detecting siren that senses sneakers up to 4 feet away.