With more than 50 million viewers across the country and more than 3.5 million spectators that line up along the streets of New York City each year, the Macy’s Thanksgiving Day Parade is a national icon that has grown into a world-famous holiday event. For almost 90 years, the Macy’s Thanksgiving Day Parade has marked the official start of the holiday season. Growing in size and scale, the Parade proudly marches down a more than 2-mile route in New York City with more than 8,000 participants in tow including Macy’s employees, their families, celebrities, athletes, clowns and dance groups spreading holiday cheer. The Parade also features America’s best marching bands, fabulous floats and Macy’s signature giant helium character balloons.

On Nov. 26, a new float from Build-A-Bear, a global brand kids love and parents trust, will roll through Manhattan during the 89th Annual Macy’s Thanksgiving Day Parade®. The latest Build-A-Bear float in the annual spectacle will feature a variety of scenes and of course, bears – all with one mission in mind: Discover Adventure! A part of the Macy’s Parade family since 2002, this year’s latest floating wonder marks the third Build-A-Bear float for the Parade which is sure to delight the more than 3.5 million spectators lining the Parade route on Thanksgiving Day.

Build-A-Bear is a multi-generational brand that will celebrate its 20th anniversary in 2017. Since the company was founded in 1997, more than 145 million furry friends have been made. Build-A-Bear has approximately 400 stores worldwide where guests can create customizable furry friends, including company-owned stores in the United States, Canada, Denmark, Ireland, Puerto Rico, and the United Kingdom, and franchise stores in Africa, Asia, Australia, Europe, Mexico and the Middle East.

“Making memories and celebrating life’s moments are at the heart of everything we do, and countless memories are made every year when the Macy’s Thanksgiving Day Parade, one of America’s most anticipated events, takes place,” said Gina Collins, chief marketing officer, Build-A-Bear. “We worked closely with the talented team at Macy’s to create exciting scenes that evoke a sense of adventure and incorporate teddy bears – the icons of our brand – into one incredible new float.”

The engineers and craftspeople at Macy’s Parade Studio began working with Build-A-Bear on the new concept in early 2015, and construction took approximately five months. The front view of the float begins with two bears playfully riding ocean waves, while a sailboat captained by a Sailor Bear rocks gently overhead. A castle featuring Build-A-Bear’s icon, Bearnard, serves as the centerpiece, complete with a friendly, smoke-breathing dragon climbing up to see a Princess Bear, who showers the crowds with confetti. The sides of the float feature different scenes of wonder and adventure including a classic teddy-bear tea party, as well as a trip to outer space on a rocket ship manned by an Astronaut Bear, who turns his head to gaze upon the world as he flies into the air with bouncing stars.

“For nearly 90 years, Macy’s Thanksgiving Day Parade has brought generations of families together to enjoy the wonder and magic of the official kick off to the holiday season,” said Amy Kule, executive producer, Macy’s Thanksgiving Day Parade. “Once again, we enthusiastically welcome Build-A-Bear and their new float to our glorious procession as together we celebrate the childlike spirit in everyone.”

More than 50 million viewers tune in to watch the magic of the Macy’s Thanksgiving Day Parade each year. The latest design from Build-A-Bear is one of only five new floats that will take part in this year’s event.

“As we look ahead to our upcoming anniversary, we recently unveiled a fresh look and feel through our new Discovery concept stores, so it was important to reflect that into the design of our newest float in the Macy’s Parade,” added Collins. “On Thanksgiving Day, our float will allow millions to get a peek at the fresh face of Build-A-Bear.”

In addition to the Parade experience, this holiday season, Build-A-Bear is once again teaming up with Macy’s to offer shop-in-shops at seven Macy’s locations nationwide so that shoppers can take part in the full Build-A-Bear Workshop experience inside a Macy’s store.

Build-A-Bear Workshop will also bring its wildly popular Merry Mission story to life with the return of everyone’s favorite eight reindeer, along with a brand-new face, to stores this season. Glisten, the strongest, fastest reindeer of all time will light the night and help Santa and his team deliver toys to everyone on the nice list. Her special medallion unlocks the Merry Mission app and its features, and additional outfits and accessories are sold separately. Fans can download the updated Merry Mission app on iTunes and Google Play starting Nov. 1. 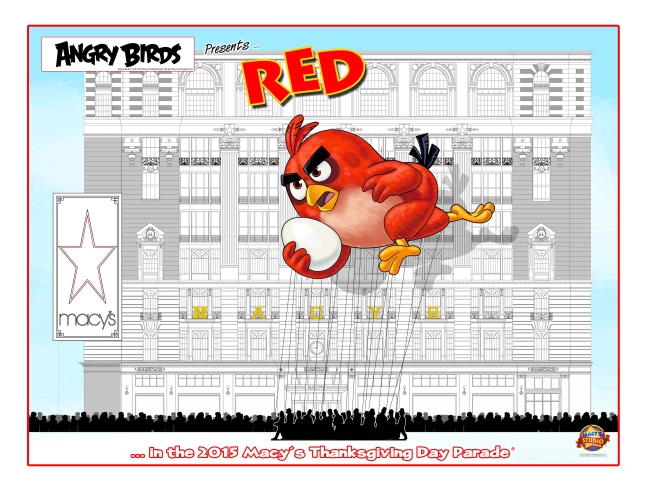 A giant bird also takes to the sky in a mad dash down Manhattan streets as THE ANGRY BIRDS MOVIE’s Red debuts as a colossal character balloon in the 89th Annual Macy’s Thanksgiving Day Parade®. Known to 3 billion fans as the hero of the blockbuster “Angry Birds” mobile game franchise by Rovio Entertainment, Red will transform into a helium giant ready to protect a precious egg during his inaugural flight in the famed holiday spectacle. Before hitting the big screen next summer in Columbia Pictures/Rovio Entertainment’s “THE ANGRY BIRDS MOVIE,” Red will migrate to New York City to celebrate the start of the holiday season during the annual Thanksgiving Day march.

“Angry Birds is a worldwide phenomenon and we are thrilled to have Red join the Macy’s Thanksgiving Day Parade balloon line-up this year, taking his place among some of the world’s most popular and recognizable characters,” said Kule. “With his trademark angry look, but lovable personality, Red will protect his precious egg as he takes flight down the streets of Manhattan and into the hearts of millions of spectators lining the Parade route and tens of millions more watching from homes across the country.”

“We could think of no better occasion than the legendary Macy’s Thanksgiving Day Parade for Red from ‘THE ANGRY BIRDS MOVIE’ to take his maiden flight. Millions of viewers will have the opportunity to share in our bursting enthusiasm as Red soars across the New York skyline in this iconic American holiday tradition,” exclaimed Randi Spieker, vice president of Consumer Products Licensing and Retail, Rovio Entertainment Ltd.

Transformed into a massive balloon from next summer’s feature film, “THE ANGRY BIRDS MOVIE,” Red is posed in a midstride dash clutching the egg like a football during a Thanksgiving Day game. Standing at approximately 45.5-feet tall, 29.7-feet wide and 44-feet long; with the biggest eyebrows in all of Manhattan at 7-feet wide, in his trademark scowl, Red is one giant angry bird, ready to take on the challenge of a holiday excursion to the Big Apple.

Columbia Pictures/Rovio Entertainment’s “THE ANGRY BIRDS MOVIE” will be released on May 20, 2016. In the 3D animated comedy, “THE ANGRY BIRDS MOVIE,” we’ll finally find out why the birds are so angry. The movie takes us to an island populated entirely by happy, flightless birds – or almost entirely. In this paradise, Red (voiced by Jason Sudeikis, “We’re the Millers,” “Horrible Bosses”), a bird with a temper problem, speedy Chuck (Josh Gad in his first animated role since “Frozen”), and the volatile Bomb (Danny McBride, “This is the End,” “Eastbound & Down”) have always been outsiders. But when the island is visited by mysterious green piggies, it’s up to these unlikely outcasts to figure out what the pigs are up to. Featuring a hilarious, all-star voice cast that includes Bill Hader (“Trainwreck,” “Inside Out”), Maya Rudolph (“Bridesmaids”), and Peter Dinklage (“Game of Thrones”), as well as Keegan-Michael Key (“Key & Peele”), Kate McKinnon (“Saturday Night Live,” next year’s “Ghostbusters”), Tony Hale (“Veep,” “Arrested Development”), Ike Barinholtz (“The Mindy Project,” “Neighbors”), Hannibal Buress (“Broad City,” Why? With Hannibal Buress”), Jillian Bell (“22 Jump Street”), Danielle Brooks (“Orange Is the New Black”), Latin music sensation Romeo Santos, and YouTube stars Smosh (Ian Hecox and Anthony Padilla); the Columbia Pictures/Rovio Entertainment film is directed by Fergal Reilly and Clay Kaytis and produced by John Cohen and Catherine Winder. The screenplay is by Jon Vitti, and the film is executive produced by Mikael Hed and David Maisel.