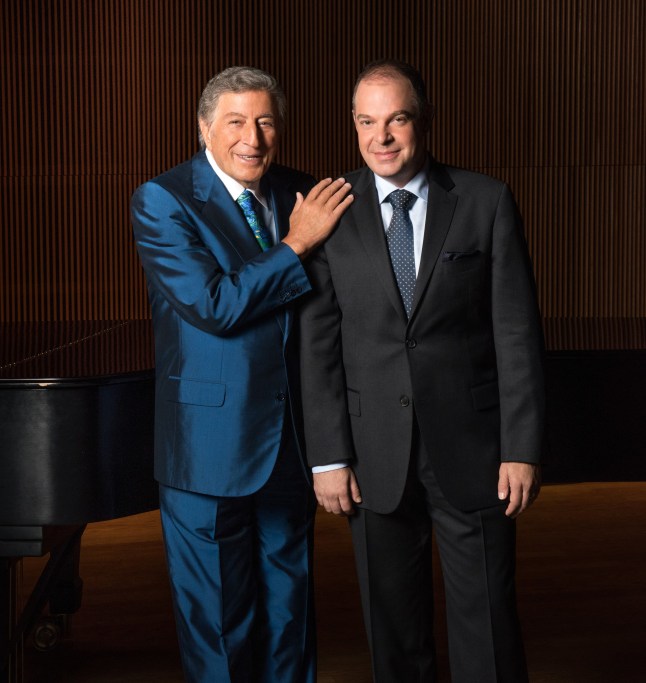 Following the enormous success of his #1, Grammy-Award winning album with Lady Gaga, Cheek To Cheek, this new release continues the classic series of Tony Bennett album releases celebrating the essentials of the Great American Songbook. The Silver Lining: The Songs of Jerome Kern is an appreciation of the genius of Jerome David Kern (1885-1945), one of the 20th century’s most important American composers of musical theater and popular music.

Tony Bennett is the only artist to successfully bridge the worlds of pop music and jazz on an international scale for over 60 years and The Silver Lining: The Songs of Jerome Kern become parts of a timeless legacy of recordings that Bennett has done throughout his career that have embraced both genres, in particular the revered piano jazz albums that he recorded with the late Bill Evans in 1975 and 1977. has become synonymous with the pop/jazz connection and in recent years has been a mentor to contemporary artists such as Lady Gaga and the late Amy Winehouse in encouraging them to embrace jazz music. With his 90th birthday less than a year away, The Silver Lining: The Songs of Jerome Kern defines what makes Bennett unique in the pantheon of great singers and is a testament to the legacy that he continues to create as a recording artist and influence in the music industry.

“The idea of a Kern Songbook project was Tony’s,” writes music historian Will Friedwald, “thereby placing Kern on the very short list of canonical composers (Rodgers & Hart, Harold Arlen, Duke Ellington, Irving Berlin, and Cy Coleman) who have been the beneficiaries of an entire album by Bennett. It was also Bennett’s idea to create the album in collaboration with the remarkable Bill Charlap….who can also take a great song we all know by heart and make us feel like we’ve never heard it before.“

Friedwald writes about music and popular culture for The Wall Street Journal, worked with Tony Bennett on his “The Good Life” memoir, and is author of eight books including the award-winning “A Biographical Guide to the Great Jazz and Pop Singers,” “Sinatra! The Song Is You,” “Stardust Melodies,” and “Jazz Singing.”

Playing alongside Tony Bennett and Bill Charlap on The Silver Lining: The Songs of Jerome Kern are pianist Renee Rosnes (on the piano duet pieces), Peter Washington (bass) and Kenny Washington (drums).

Over the course of his career, Kern composed more than 700 songs, creating musical elements used in more than 100 stage works, collaborating with the greatest lyricists and librettists of the era including P.G. Wodehouse, Oscar Hammerstein II, Dorothy Fields, Johnny Mercer, Ira Gershwin, E.Y. Harburg and many others on a seemingly limitless repertoire of classic songs including “Ol’ Man River,” “Can’t Help Lovin’ Dat Man,” “Smoke Gets in Your Eyes,” “The Way You Look Tonight,” “Long Ago and Far Away” and many more.

New York native Jerome Kern was a major force on Broadway and in Hollywood musicals in a career that spanned more than four decades. He expanded on earlier musical theater traditions, from vaudeville to operetta, to embrace new dance rhythms, syncopation and jazz progressions and helped invent the modern musical template. While many of his Broadway musicals and Hollywood musical films were contemporary smash hits, Kern is perhaps best remembered today through revivals of “Show Boat,” one of his signature achievements.

In his liner notes for The Silver Lining: The Songs of Jerome Kern, Friedwald describes Kern as “...the key link between the great music of historical and contemporary classics, a direct connection between Brahms and Charlie Parker….a key architect of a uniquely American art form that would eventually take shape as musical theater….one of the founding fathers of a term that Tony Bennett later coined himself, ‘the Great American Songbook.‘”

One of the world’s premier jazz pianists, Bill Charlap has performed with many leading artists of our time, ranging from Phil Woods and Bennett to Gerry Mulligan and Wynton Marsalis. He is known for his interpretations of American popular songs and has recorded albums featuring the music of Hoagy Carmichael, Leonard Bernstein, George Gershwin, Irving Berlin, Cole Porter, Richard Rodgers and Duke Ellington.

Born in New York City, Charlap began playing the piano at age three. His father was Broadway composer Moose Charlap, whose credits include Peter Pan, and his mother is singer Sandy Stewart, who toured with Benny Goodman, appeared on the Ed Sullivan and Perry Como shows and earned a Grammy Award nomination for her recording of “My Coloring Book.”

The Bill Charlap Trio was formed in 1997 with bassist Peter Washington and drummer Kenny Washington, and is now recognized as one of the leading groups in jazz. The trio has received two Grammy Award nominations: for Somewhere: The Songs of Leonard Bernstein, and for The Bill Charlap Trio: Live at the Village Vanguard, both on the Blue Note label. Mr. Charlap now records for the Impulse! record label, and his new trio recording, Notes From New York, will be released in March of 2016. The Bill Charlap Trio tours all over the world, and their New York engagements include regular appearances at Jazz at Lincoln Center and the Village Vanguard.

Mr. Charlap has been newly appointed Director of Jazz Studies at William Paterson University, in Wayne, New Jersey. Founded in 1973, the program is one of the longest running and most respected jazz programs in the country, and Charlap will be the fifth director of the program, following distinguished musicians Thad Jones, Rufus Reid, James Williams and Mulgrew Miller.

With the more than 700 Jerome Kern compositions to choose from, the set list for The Silver Lining: The Songs of Jerome Kern is a distillation of essential highlights from a boundless catalog. With these interpretations of some of Jerome Kern’s finest songs, Tony Bennett and Bill Charlap offer a definitive introduction to Kern’s music while providing a deep understanding of the abiding and universal qualities of these songs.

ALL THE THINGS YOU ARE (single piano)

LONG AGO AND FAR AWAY (piano duet)

NOBODY ELSE BUT ME (trio)

PICK YOURSELF UP (trio)

THE SONG IS YOU (piano duet)

THEY DIDN’T BELIEVE ME (trio)