As the July and August fashion magazines begin hitting your mailboxes within the next two months, Cole Haan launched its campaign, “Prepare For Takeoff,” as part of the Fall 2015/Winter 2016 Collection this past week. Set against the neo-futuristic backdrop of the TWA Flight Center, Cole Haan’s most innovative product to-date, ZerøGrand, will soar this coming fall with a multi-channel digital and social campaign featuring three of New York City Ballet’s brightest stars—Sara Mearns, Megan Fairchild and Gretchen Smith—alongside two renowned Parkour athletes, Devon Spence and Jason Chu. It puts the pillars of Cole Haan Grand.OS innovation—lightness, flexibility, and cushioning—to the ultimate test.

PREPARE FOR TAKEOFF WITH DEVON SPENCE 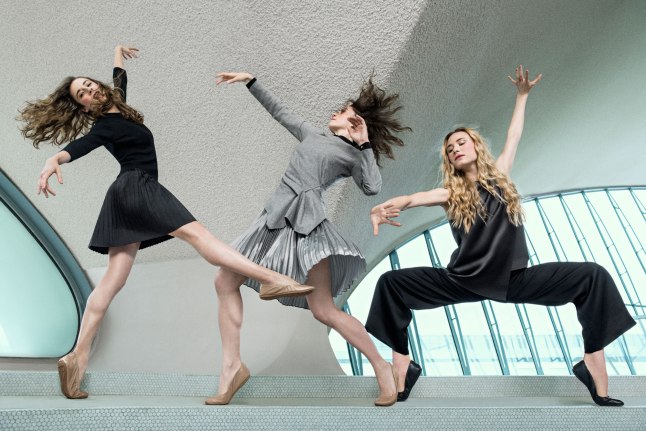 “Cole Haan has a rich heritage of innovation. With the introduction of ZerøGrand, Grand.OS and the opening of The Global Innovation Center, we decided to explore how we could celebrate Cole Haan Innovation through movement,” says David Maddocks, Chief Marketing Officer & GM of Business Development at Cole Haan. “Cole Haan was a 34 year old company when Saarinen’s terminal first opened in 1962. As a leading maker of American dress and casual footwear at that time, there’s no doubt Cole Haan has made its way through that terminal many times before. So, we’d like to think of this as a return trip,” Maddocks concluded.

PREPARE FOR TAKEOFF WITH MEGAN FAIRCHILD AND JASON CHU

PREPARE FOR TAKEOFF WITH MEGAN FAIRCHILD

With its minimalist, chic silhouette and extreme flexibility, the Studio Grand Ballet Collection for women represents the ultimate combination of form and function in a ballet flat. Effortlessly transitioning from studio to street in style, the ZerøGrand Stagedoor Ballet Flat raises the bar with its luscious mix of comfort and functionality. Designed in collaboration with three dancers from New York City Ballet, ZerøGrand offers a sporty touch to an otherwise polished look, infusing irreverence with cool. Supple nappa leather wraps this pretty wardrobe staple, while a sturdy rubber outsole infused with Grand.OS technology makes it perfect for all-day wear. Pair this style with skinny denim, cigarette pants or an A-line dress. 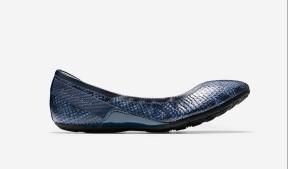 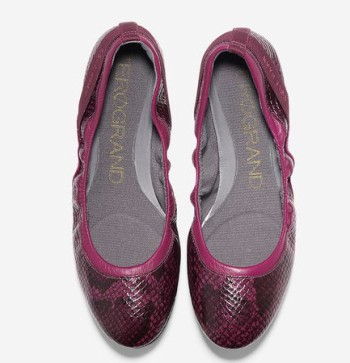 New York City Ballet Principal dancer, Sara Mearns, adds, “This season, we worked with Cole Haan to create something totally new—the ZerøGrand Stagedoor Ballet Flat. We took great care in incorporating design elements into the silhouettes through a different lens specifically for the campaign. It really challenged the whole cast to think of how creatively we could bring lightness, flexibility and cushioning to life visually with our movement. I have never been more proud of something and hope all women wearing our shoe feel the same life-lifting experience that we do!” 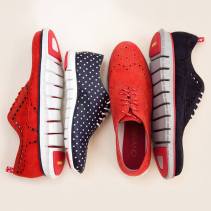 “Blending craft and innovation, this brogue features laser-treated suede for ventilation and a pull tab to help the wearer get the shoe off and on.” Chris V., ZeroGrand Footwear Designer (www.facebook.com/colehaan)

“I’m the perfect sample size and tested these shoes out in the office. The response was overwhelming – I knew that we had to bring them out for summer.” Caroline V, ZeroGrand for Women Designer (www.facebook.com/colehaan)

Above all the rest, the astronomically light ZeroGrand adds more motion to style. (www.facebook.com/colehaan)

Whether you’re headed to barre class or brunch, the ZerøGrand Mary Jane has you covered. This sporty yet feminine silhouette, crafted in lightweight neoprene and mesh, is the embodiment of contemporary design, while the sigature Cole Haan Grand.OS technology in the outsole will keep you comfortable when navigating the urban landscape. Leggings, skinny jeans and your favorite athleisure styles are the perfect pieces to pair with the ZerøGrand Mary Jane.

At the intersection of sport and fashion lives the ZerøGrand Sneaker. Sleek black mesh and eye-catching silver metallic accents make for a trendy style statement, while the Cole Haan Grand.OS technology in the outsole will keep you comfortable when navigating the urban landscape. Match with cotton joggers or leggings and a slouchy top for Saturday barre class or Sunday errands.

Boy meets girl in Cole Haan’s best-selling, most sought-after women’s ZerøGrand Wing Oxford styles that perfectly balance masculine and feminine with panache. Crafted from rainbow-hued suede with laser-cut details, they feature white rubber soles with Grand.OS technology that are carefully constructed with a focus on flexibility and reduced weight. These customer favorites are a casual styling game changer. Match with cuffed boyfriend jeans and a silk blouse for off-duty wear or a skirt and button-down for an unexpected twist to business attire.

For men, the ZerøGrand Sport Chukka fits the bill perfectly. Built on Cole Haan’s signature own Grand.OS technology, the ZerøGrand line rips out the guts of traditional shoes and replaces every stitch, layer, and design detail with carefully considered components that render the shoes ridiculously lightweight. It’s the result of modern materials and cutting-edge construction techniques that usher in an entirely new approach to the engineering of shoes for everyday wear. By zeroing in on greater flexibility, reduced weight, and increased cushioning in the Grand.OS system, the athletic-inspired ZerøGrand Sport Chukka feels like your lightest weight running sneaker. Featuring sporty mesh and leather uppers and an EVA midsole with a rubber outsole for ultimate traction and flexibility.

The campaign goes far beyond still imagery, and includes a behind the scenes look at how the cast takes their experience with these elements from studio to street. It will be featured on ColeHaan.com, in digital media and across the brand’s social channels of Facebook, Instagram, Pinterest, Twitter, Tumbler, YouTube as well as on the Cole Haan iPhone App, which was recently lauded for its integration of ApplePay.

“As the choreographer, the location was a dream of inspiration! The beauty and divine artistry of the structure naturally invited the curves, lines and angles of movement. The classic beauty of the clothing and footwear was the perfect cherry on top to create an epic image that takes your breath away,” shares the extraordinary choreographer Tamara Levinson, who was tapped for the shoot.

Photographer Sebastian Kim, adds, “I’ve always wanted to shoot at this iconic location—it’s such a landmark which perfectly complimented the campaign.”

***Parkour, developed in France, is a training discipline using movement that developed from military obstacle course training. Practitioners aim to get from A to B in the most efficient way possible. This is done using only the human body and the surroundings for propulsion, with a focus on maintaining as much momentum as possible while still remaining safe. Parkour can include obstacle courses, running, climbing, swinging, mantling, vaulting, jumping, rolling, quadrupedal movement, and other, similar movements depending on what movement is deemed most suitable for the given situation. Parkour’s development from military training gives it some aspects of a non-combative martial art. It’s also an activity that can be practiced alone or with others, and is usually – but not exclusively – carried out in urban spaces.

One thought on “COLE HAAN LAUNCHES “PREPARE FOR TAKEOFF” CAMPAIGN”