What are some other words for summer fun? Tall Ships. Fireworks. Festivals. Beer gardens. Pop-up parks. Philadelphia. This summer will go down as a season of non-stop, pull-out-all-the-stops fun in the city that scored a #3 placement on The New York Times’ influential “52 Places to Go in 2015” list.

As the birthplace of America, Philadelphia knows how to shine. Fireworks blazing over the Philadelphia Museum of Art are a Fourth of July tradition during Philadelphia’s multi-day Wawa Welcome America! bash. Timed perfectly with exhilarating live music, the fireworks paint the skies over the Benjamin Franklin Parkway.
Credit: Photo by G. Widman for Visit Philadelphia™

Some of the summer highlights include the Tall Ships Philadelphia Camden Festival; the launch of Indego, Philadelphia’s bike-sharing program; the eagerly awaited return of the acclaimed Spruce Street Harbor Park; and the season-long showing of Discovering the Impressionists: Paul Durand-Ruel and the New Painting at the Philadelphia Museum of Art. Add in plenty of pop-up beer gardens and public art displays for an unforgettable Philly summer.

Here’s a look at what’s happening: 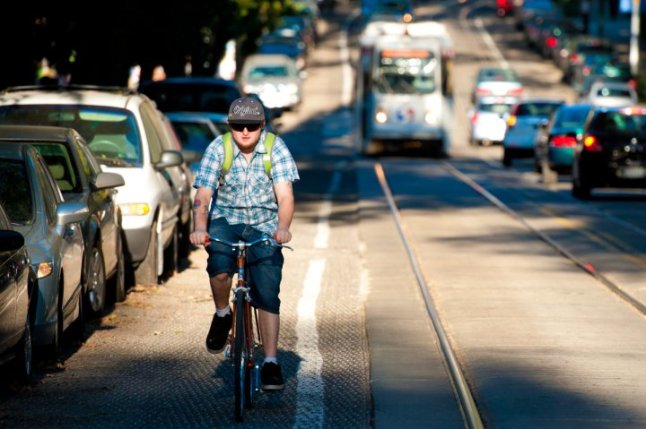 West Philadelphia is one of the most easily traveled areas of the city. People can easily access the neighborhood from Center City via cabs, the Market-Frankford Line (also called “the el” for its elevated section) and one of the nation’s few remaining streetcar networks. The trolleys run from City Hall down Market Street and through University City, with lines servicing the neighborhood’s three main corridors of Lancaster, Baltimore and Woodland Avenues. West Philly also boasts some of the most bicycle-friendly streets in the city, with a network of roughly 25 miles of bike lanes. Credit: Photo by J. Fusco for Visit Philadelphia™ 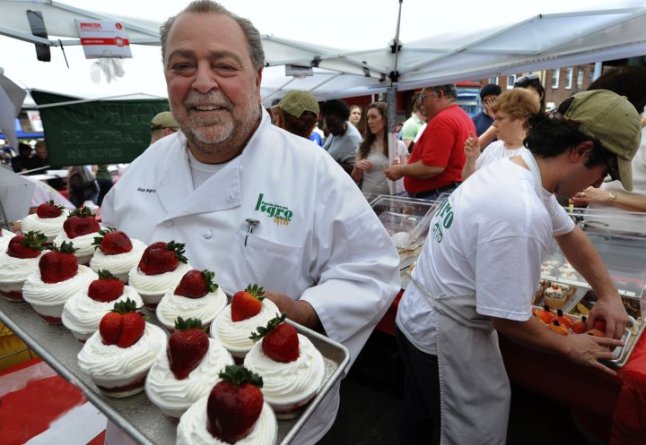 Always a bustling neighborhood, the Italian Market turns it up a notch during the 9th Street Italian Market Festival in May. Live entertainment and games accompany the mouthwatering cannolis, homemade sausages, imported meats and cheeses, luscious cappuccino, specialty cookware and fresh pastas that have made the market a favorite for visitors and residents alike. Credit: Photo by R. Kennedy for Visit Philadelphia™ 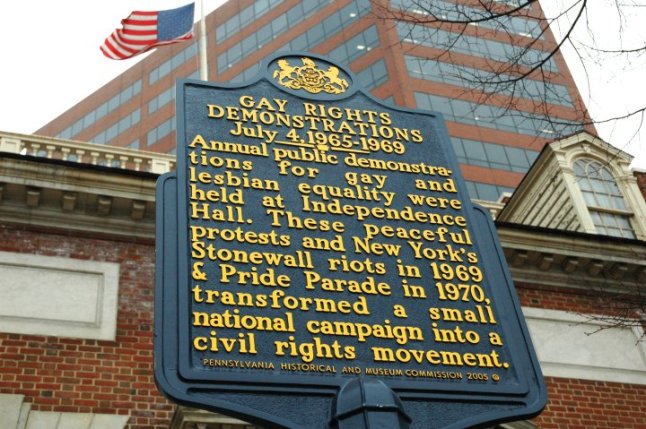 Standing directly across the street from Independence Hall and the Liberty Bell Center at 6th and Chestnut Streets, this historic marker was erected to coincide with the 40th anniversary of the first Annual Reminder, a demonstration led by gay activists on July 4 from 1965 to 1969. Credit: Photo by K. Ciappa for Visit Philadelphia™

When the Tall Ships Philadelphia Camden pulls into port from June 24-28, 2015, visitors can watch the colorful parade of sail that includes the Gazela (pictured here) and L’Hermione, a replica of the ship that brought General Lafayette to the aid of the fledgling United States during the Revolutionary War, along with many other vessels from around the world. Ships will be docked on both sides of the river at Penn’s Landing and along the Camden Waterfront. Also on tap: live entertainment, hands-on activities and a dazzling fireworks display. Credit: Photo courtesy of Draw Events

The Delaware River Waterfront Corporation’s new Spruce Street Harbor Park offers a summer getaway right in Philly. From June 27 through August 31, visitors can enjoy festivals, concerts and movies on the Great Plaza; relax in one of the giant hammocks in the Hammock Lounge; cool off under the Mist Walk; lounge under an umbrella at the Urban Beach; and indulge in their favorite summer foods and beverages at The Oasis, a series of floating barges accented with a lily pad garden and hang-out area.
Credit: Photo by M. Edlow for VISIT PHILADELPHIA™ 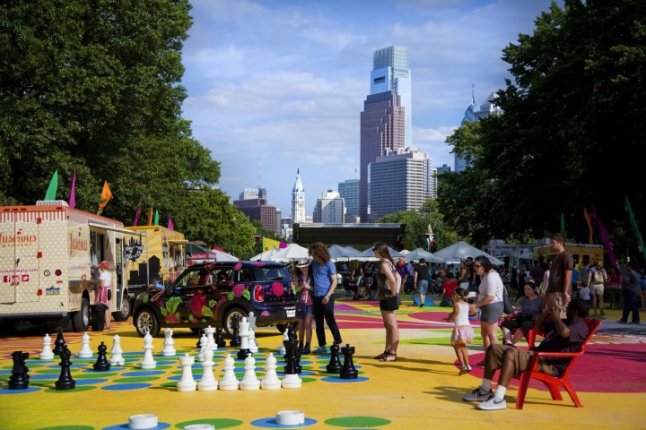 Back on the Benjamin Franklin Parkway for its second summer of outdoor fun, The Oval features food, musical performances, movies, mini golf and a beer garden on Wednesday through Saturday nights through August 16. The pop-up park is sandwiched between two spectacular views: the Center City skyline and the Philadelphia Museum of Art.
Credit: Photo by M. Fischetti for VISIT PHILADELPHIA™ 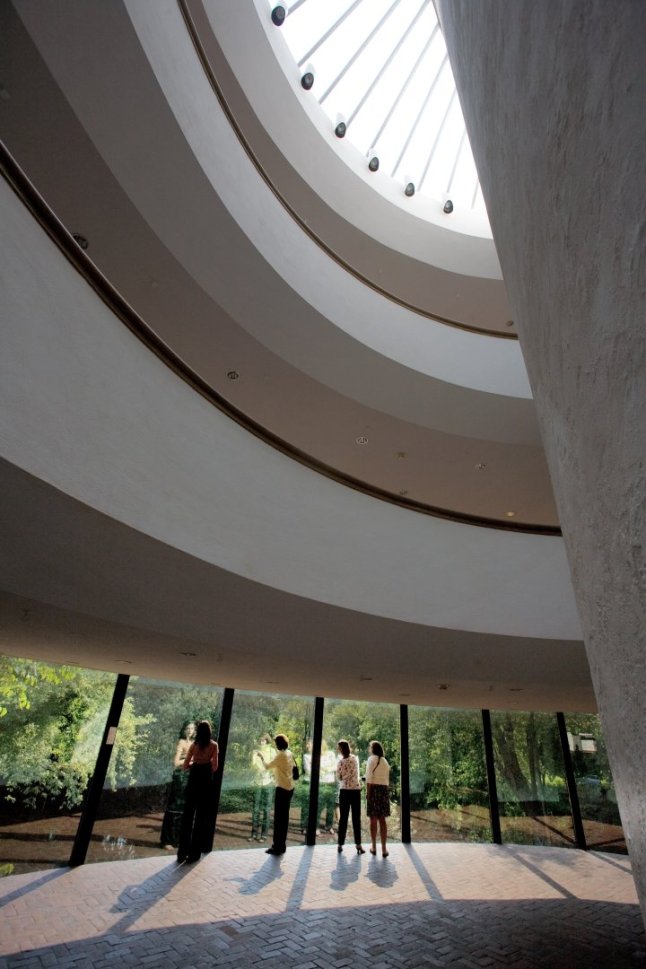 Internationally known for its collection of artwork by three generations of Wyeths and other Brandywine River School artists, the Brandywine River Museum exhibits American illustration, still life and landscapes depicting the rolling Chester County countryside. Visitors can also enjoy the wildflower and native plant gardens in bloom around the museum.
Credit: Photo by J. Smith for Visit Philadelphia™

Barnes Foundation architects Tod Williams and Billie Tsiem designed a “gallery within a garden and a garden within a gallery,” a concept that honors the work of both Dr. Albert Barnes and his wife Laura. Blending art, nature, education and aesthetics, the 4.5-acre Barnes campus is a fitting addition to the culturally rich Parkway. Philadelphia’s tallest building, the Comcast Center, stretches 975 feet high in the distance.
Credit: Photo by B. Krist for Visit Philadelphia™

Meg Saligman’s “Philadelphia Muses” at 13th and Locust Streets is one of 3,000 works commissioned by the Philadelphia Mural Arts Program, which began in 1984 as a component of the city’s Anti-Graffiti Network.
Credit: Photo by K. Ciappa for Visit Philadelphia™

The area’s largest outdoor juried arts and crafts festival takes place every June along energetic Main Street in Manayunk. Each year, the Manayunk Arts Festival presents an eclectic variety of fine arts and crafts from about 300 artists from across the country.
Credit: Photo by J. Fusco for VISIT PHILADELPHIA™

The Philadelphia Museum of Art was forever immortalized in the classic Rocky film franchise. While the “Rocky Steps” draw a slew of visitors who want to reenact Stallone’s on-screen training regimen, the museum is even more impressive inside. The astounding art collection here comprises more than 200 galleries housing more than 227,000 works in media, including photography, sculpture, paintings, textiles and more.
Credit: Photo by M. Fischetti for Visit Philadelphia™

The region’s premier horticultural wonderland, Longwood Gardens in Kennett Square, Chester County rambles over 1,050 acres of gardens, woodlands and meadows. The illuminated fountain shows brighten the vast gardens at night during the summer and holiday seasons.
Credit: Photo by B. Krist for Visit Philadelphia™

The world’s only museum dedicated to the U.S. Constitution, the National Constitution Center puts into historical context the most famous four pages ever written through multimedia exhibitions, sculpture, film, artifacts and interactive displays. In Signers’ Hall, visitors walk among the life-sized statues of the 39 signers of the Constitution—and they can choose to sign their own John Hancock or to dissent. Credit: Photo by J. Smith for Visit Philadelphia™

Visitors to Historic Philadelphia can’t help but notice the striking National Museum of American Jewish History, located right on Independence Mall just steps from the Liberty Bell. The glass façade reflects the open nature of America and the perennial fragility of democracy, and the Religious Freedom statue welcomes all who enter.
Credit: Photo by M. Kennedy for Visit Philadelphia™

The Philadelphia Zoo, the nation’s first and one of the most animal-packed zoos in the country, sits among a charming 42-acre Victorian garden. With tree-lined walks, ornate iron cages, animal sculptures, and wide-open exhibits, visitors can connect with hundreds of animals in a naturalistic setting.
Credit: Photo by J. Fusco for VISIT PHILADELPHIA ™

Kids go wild over the Rock Around the Block Parade at Sesame Place, the only theme park in the nation featuring the popular TV show’s most lovable characters, including Zoe and Big Bird. A water park, rides, interactive activities, fireworks and the brand new Sunny Day Carousel add to the fun.
Credit: Photo by R. Kennedy for Visit Philadelphia™

At more than 200 years old, The Academy of Natural Sciences of Drexel University is America’s oldest natural history museum. Visitors of all ages can wander through a tropical garden filled with live butterflies, meet live animals, see three continents of wildlife in their natural habitats and get face to face with towering dinosaurs.
Credit: Photo by J. Fusco for VISIT PHILADELPHIA™

Back on the Benjamin Franklin Parkway for its second summer of outdoor fun, The Oval features food, musical performances, movies, mini golf and a beer garden on Wednesday through Saturday nights through August 16. The pop-up park is sandwiched between two spectacular views: the Center City skyline and the Philadelphia Museum of Art.
Credit: Photo by M. Fischetti for VISIT PHILADELPHIA™ 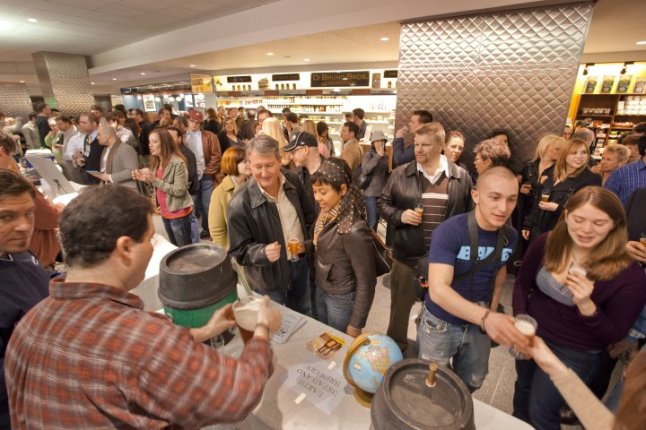 Beer lovers sample the suds during Philly Beer Week’s Opening Tap kickoff night. Brewers and ale aficionados come from all over the U.S. and beyond for the 10-day festival, overflowing with dinners, tastings, tours, workshops, meet-and-greets and more that highlight Philly’s brewing culture.
Credit: Photo by G. Widman for Visit Philadelphia™

Ahmir “?uestlove” Thompson of the pioneering hip-hop group The Roots adjusts his signature hair pick during the second annual Roots Picnic at Penn’s Landing on June 6, 2009. The Roots are Philadelphia’s honorary creative ambassadors for 2009, part of the new Philly 360º initiative that highlights the city’s creative scene. The day-long concert also featured Philly’s own Santigold, Writtenhouse, Back to Basics, TV on the Radio, The Black Keys, Public Enemy and others.
Credit: Photo by M. Kennedy for Visit Philadelphia™

Before crossing the finish line on the Benjamin Franklin Parkway, the international field of pro cyclists must complete the grueling 156-mile course, which includes 10 laps up the infamous 17% grade Manayunk Wall. This event is commonly called the “Bike Race.”
Credit: Photo by R. Kennedy for Visit Philadelphia™

The Odunde Festival, held each June on Philadelphia’s South Street, is the largest African-American street festival in the nation. The festival covers 12 city blocks and features 100 art, craft and food vendors, as well as two stages of live entertainment by African and Caribbean performers.
Credit: Photo by M. Edlow for Visit Philadelphia™ 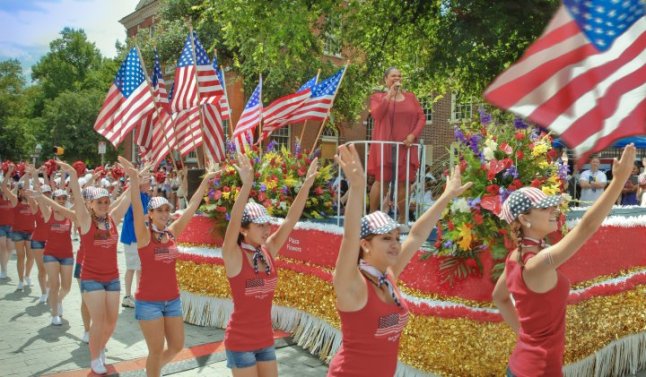 VISIT PHILADELPHIA® makes Philadelphia and The Countryside® a premier destination through marketing and image building that increases the number of visitors, the number of nights they stay and the number of things they do in the five-county area. On VISIT PHILADELPHIA® ’s official visitor website and blog, visitphilly.com and uwishunu.com, visitors can explore things to do, upcoming events, themed itineraries and hotel packages. Compelling photography and videos, interactive maps and detailed visitor information make the sites effective trip-planning tools. Along with Visit Philly social media channels, the online platforms communicate directly with consumers. Travelers can also call and stop into the Independence Visitor Center for additional information and tickets.