A highlight of Philadelphia’s multiday Fourth of July celebration, the fireworks over the Philadelphia Museum of Art wow onlookers along the Benjamin Franklin Parkway and all over the city. In Fairmount Park, Lemon Hill is perfectly perched for optimal viewing, and those in the know head to the lesser-known spot to watch the dazzling show. Credit: Photo by J. Fusco for VISIT PHILADELPHIA™

When Fourth of July rolls around, Philadelphia—America’s birthplace—paints the town red, white and blue thanks to eight days of music, exhibitions, Colonial characters and re-enactments, patriotic ceremonies and fireworks. This year, the city (through the efforts of VISIT PHILADELPHIA®) amps up the revelry surrounding the annual Wawa Welcome America! festivities with Tall Ships Philadelphia Camden, the largest sailing event in North America; and a citywide celebration of the 50th Anniversary of the Gay Rights Movement.

Here are a few highlights of Philadelphia’s patriotic party:

When the Tall Ships Philadelphia Camden pulls into port from June 24-28, 2015, visitors can watch the colorful parade of sail that includes the Gazela (pictured here) and L’Hermione, a replica of the ship that brought General Lafayette to the aid of the fledgling United States during the Revolutionary War, along with many other vessels from around the world. Ships will be docked on both sides of the river at Penn’s Landing and along the Camden Waterfront. Also on tap: live entertainment, hands-on activities and a dazzling fireworks display. Credit: Photo courtesy of Draw Events 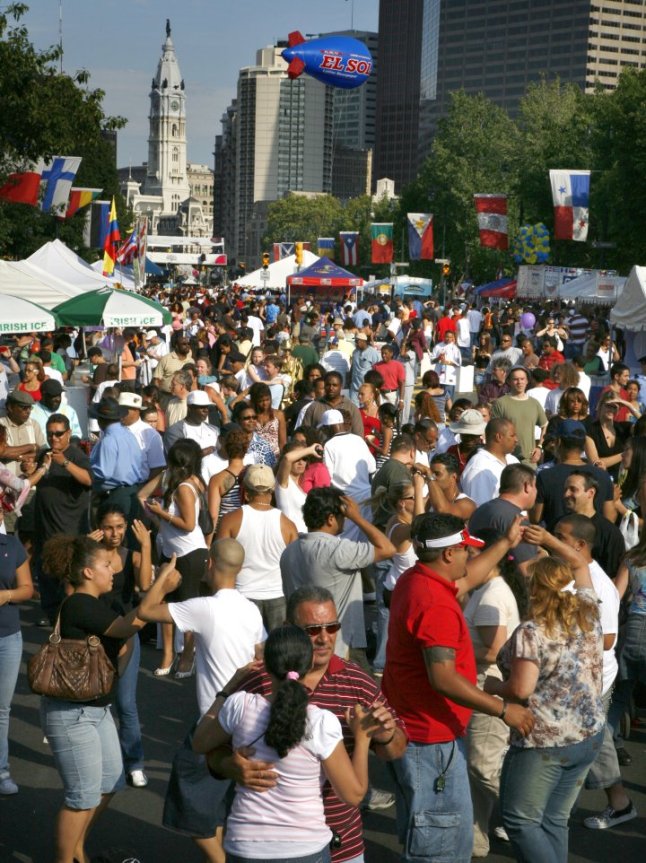 Hundreds of aspiring salsa dancers dance the day away on the Benjamin Franklin Parkway for the Party on the Parkway, one of many events taking place during Wawa Welcome America!, Philadelphia’s multi-day celebration of the country’s birthday. Credit: Photo by R. Kennedy for Visit Philadelphia™

Some of the top names in music have performed at the annual Fourth of July concert at Penn’s Landing. The event, which draws huge crowds every year, is a favorite during Wawa Welcome America!, Philadelphia’s multi-day Independence Day celebration. Credit: Photo by J. Smith for Visit Philadelphia™

The month of July also includes the following events:

Through July 2015
FRAMING FRAKTUR: A CONTEMPORARY RESPONSE. The Free Library of Philadelphia collaborates with contemporary visual artists to reinterpret and reframe the Fraktur collection through a contemporary lens. The exhibition features a group of artists with thematic ties to Fraktur. (215) 567-7710, freelibrary.org

July 1-October 31, 2015
NIGHTSCAPE: A LIGHT AND SOUND EXPERIENCE. This innovative display at Longwood Gardens takes guests on a colorful journey throughout the grounds as they experience moving imagery and lights timed to music. (610) 388-1000, longwoodgardens.org

July 7-12, 2015
QFLIX PHILADELPHIA. This annual festival celebrates all genres of film that pertain to or were created by members of the lesbian, gay, bisexual and transgender communities. This year’s venues are clustered along and near the Avenue of the Arts: Kimmel Center, Prince Music Theater and The University of the Arts. qflixphilly.com

July 10-12, 2015
BLOBFEST. This three-day extravaganza in Phoenixville is centered around the horror/sci-fi flick The Blob and includes screenings, themed competitions, a street fair and the recreation of the pivotal scene where hundreds of scared townspeople flee the Colonial Theatre. (610) 917-1228, thecolonialtheatre.com

July 11, 2015
BASTILLE DAY. The masses storm the castle on Eastern State Penitentiary as re-enactors and audience members playfully recreate the storming of the Bastille at the nation’s first “modern” prison. Emceed by “Edith Piaf,” Philly’s version of this historic event includes performances by experimental cabaret troupes, dancing baguettes, Napoleon, Joan of Arc and Marie Antoinette throwing more than 3,000 Tastykakes out to the assembled crowd. (215) 236-3300, easternstate.org

July 24-26, 2015
XPONENTIAL MUSIC FESTIVAL. WXPN, the public radio station of the University of Pennsylvania, brings together musical legends and new performers at Wiggins Park and the Susquehanna Bank Center on the Camden waterfront. xpn.org

July 30-August 2, 2015
BLACK STAR FILM FESTIVAL. Hailed by Ebony magazine as “the black Sundance,” this festival screens dozens of films about the global black experience and films by people of African descent. (267) 603-2755, blackstarfest.org

VISIT PHILADELPHIA®, formerly known as Greater Philadelphia Tourism Marketing Corporation, makes Philadelphia and The Countryside® a premier destination through marketing and image building that increases the number of visitors, the number of nights they stay and the number of things they do in the five-county area.