FIAMMA will launch in New York at a global event to celebrate the second chapter of L’Icona, the birth of a Ferragamo house icon, with a short film and interview series featuring a fascinating cast of international families and their female generations. 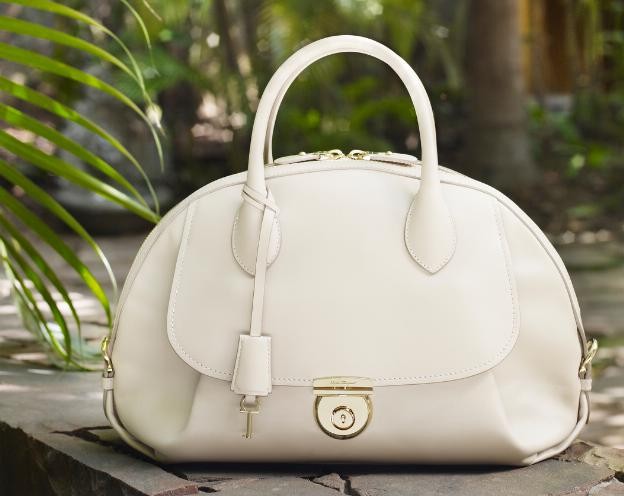 Featured in the Fall/Winter 2014 Ready-to-Wear fashion show in Milan this past February, FIAMMA’s first runway incarnation was unveiled, focusing on exclusive exotics-black crocodile, the combination of pony hair and calfskin, and the sensual softness of palmellato buffed calfskin, complimented by an indulgent silk lining resurrecting an archival foulard print from the 1970’s and polished gold hardware handles.

The new handbag collection from Salvatore Ferragamo Creative Director Massimiliano Giornetti, draws inspiration from the different female generations of the Ferragamo family and their enduring influence on the House today. Ultra-sophisticated design and unique construction reflect the inherent DNA of Ferragamo’s legacy and future through the harmonious mix of exquisite materials including calfskin, python, pony hair and crocodile adorned with sleek metal hardware details.

Named after Salvatore’s late daughter Fiamma Ferragamo, the house’s leather accessories and shoe designer for almost 40 years who founded the iconic Vara, the digital experience will stay true to its namesake by recognizing women and families for their inherited legacies – unique talents, reputations, impeccable achievements, and inherent styles – captured in an intimate and personal environment, whilst discussing their shared and common traits.

The semi-circular top handle, designed in a range of five variant sizes, incorporates a functional pocket fastened with a lock that recalls the Gancio, the eternal symbol of Ferragamo’s history and dedication to modern design and luxurious craftsmanship. A combination of undeterred quality and functionality translates into a rich series of luxe details: top-stitched ribbed handles, double zip hardware closure, removable adjustable shoulder strap and elegant satin lining.

The Festival’s signature programs include the Filmmaker Retreat, Music in Film Nights at The GRAMMY Museum®, Celebrating Women Filmmakers, Master Classes, Spirit of Independence Award, LA Muse and more. Over 200 features, shorts, and music videos, representing more than 40 countries, make up the main body of the Festival.  The Festival also screens short films created by high school students and a special section devoted to music videos.

This year, the Festival received 5,952 submissions from filmmakers around the world, compared to 5,428 last year. The final selections represent 35 World, International, North American and US premieres. 17 of the premieres are in the Narrative and Documentary Competition sections. 9 of the World Premieres are in the inaugural LA Muse section.

The 2014 Los Angeles Film Festival, which returns to downtown Los Angeles at L.A. LIVE for a fifth year and runs from Wednesday, June 11 to Thursday, June 19, will screen a diverse slate of nearly 200 feature films, shorts and music videos from 40 countries; and as previously announced, filmmaker Lisa Cholodenko will serve as Guest Director, and Sony Pictures Classics‘ Tom Bernard and Michael Barker will receive the Spirit of Independence Award. A conversation with them will be followed by a screening of Crouching Tiger, Hidden Dragon (2000).

Also announced earlier: the Master Class with Academy Award®-winning musician/producer/composer Atticus Ross (The Girl with the Dragon Tattoo and The Social Network); Funny Talk, A Conversation with Key and Peele; and the Festival’s annual celebration of women’s achievements in film, Women Who Call the Shots: A Celebration of Women Directors and Showrunners, featuring Debra Granik (Winter’s Bone), Nicole Holofcener (Enough Said), Marta Kauffman (Friends) and Gina Prince-Bythewood (Love and Basketball). The Festival has also partnered with Funny Or Die to launch Make ’em LAFF, an internet talent search to discover content creators of color and underrepresented voices who specialize in comedy.

“Los Angeles has nurtured the collective hopes and dreams of generations,” said Allain, Festival Director. “This year in honor of our 20th anniversary, we’re putting the spotlight on films, conversations and performances inspired by the spirit of L.A. Many events are One Night Only so come out and celebrate!”

The Festival concludes with the Premiere of Warner Bros Pictures’ Jersey Boys. The film is the big-screen version of the Tony Award-winning musical “Jersey Boys” and tells the story of four young men from the wrong side of the tracks in New Jersey who came together to form the iconic 1960s rock group The Four Seasons. The story of their trials and triumphs are accompanied by the songs that influenced a generation, including “Sherry,” “Big Girls Don’t Cry,” “Walk Like a Man,” “Dawn,” “Rag Doll,” “Bye Bye Baby,” “Who Loves You” and many more. Warner Bros. will release the film on June 20.

“We’ve got an amazing line-up for our 20th anniversary: starting with a bang with Bong and ending with a musical celebration from Clint Eastwood,” said Ansen. “It’s exciting to see Eastwood still tackling new forms. His deft, rousing translation of ‘Jersey Boys’ from stage to screen is further confirmation of his amazing, ageless talent.”

Ansen adds, “This is truly a festival for new discoveries—35 Premieres (23 of them World Premieres) and festival gems culled from all over the world. We have more matinees this year, so you can make a whole day of it. I think we’ve put together a feast—a grand mix of comedies, dramas, documentaries, thrillers, shorts, retros and art house fare—that will appeal to movie lovers of every stripe.”

The Gala Screenings at the 2014 Festival include Ira Sachs’ Love Is Strange, which stars John Lithgow and Alfred Molina as longtime companions who finally get to marry, only to be separated when they’re forced out of their New York apartment in Sach’s ode to love, family ties and big city life. Also part of the Gala Screenings is Justin Simien‘s Dear White People starring Tyler James Williams, Tessa Thompson, Teyonah Parris, Brandon Bell. When a riot breaks out over a popular African-American-themed party thrown by a white fraternity, four black students at Winchester University are provoked to take divergent actions in Simien’s breakthrough satire. Also in the Gala section is screenwriter Hossein Amini‘s directing debut, The Two Faces of January, a sleek thriller set in Greece and Istanbul in 1962. Viggo Mortensen, Kirsten Dunst and Oscar Isaac are three Americans abroad caught in a web of murder and deceit in this taught, stylish adaptation of a Patricia Highsmith thriller. Amini is the Oscar®-nominated screenwriter of works like Drive and The Wings of the Dove.

Another highlight from this year’s line-up is the Free Community Screenings, including the pre-festival screening of Clueless from director Amy Heckerling. Other Free Festival screenings include a Dance-A-Long screening of Luis Valdez’s La Bamba, Dave LaMattina and Chad Walker‘s I Am Big Bird: The Caroll Spinney Story, Buster Keaton‘s Cops and Sherlock Jr., and Thomas Miller‘s Limited Partnership.

The Music Video section is comprised of Eclectic Mix 1 & 2 and I See Music: Exploring Beyoncé’s Visual Album, a simultaneous audio/visual experience, screening the non-linear short films that illustrate the songs on her most recent release, followed by an extended talk with the creators and directors of those videos. The Festival is also adding a brand Interactive section called Let’s Play, which features an international selection of video game play throughs with commentary by the gamers and developers. END_OF_DOCUMENT_TOKEN_TO_BE_REPLACED