Considered ‘the ambassador of Peruvian cuisine,’ Acurio continues to gain culinary acclaim with his unique restaurants which rank among the best in the world. The opening of La Mar by Gastón Acurio in Miami marks the third Acurio restaurant in the U.S., following sister concepts La Mar Cebicheria in San Francisco and Tanta in Chicago.

“We are extremely excited to introduce the spirit of Peruvian food culture to the vibrant city of Miami,” says Chef Gastón Acurio. “Our new La Mar by Gastón Acurio restaurant pays tribute to the sea with a beautiful waterfront location and the freshest local seafood on the menu.”

The dedicated Ceviche and Anticucho bars invite guests to journey through La Mar’s celebrated menu. Ceviches and Tiraditos utilize the cooking technique of curing fish through acidic juices and are presented in 15 different dishes priced from USD 9 to USD 29.

In celebration of La Mar’s opening, Mandarin Oriental, Miami has partnered withLAN Airlines in the The Culinary Adventure Trip Giveaway Sweepstake/Giveaway. The giveaway will award one winner VIP dining experiences at celebrity chef Gastón Acurio’s restaurants in Miami and Lima, Peru, which is home to the original La Mar Cebicheria. The prize includes premium business class tickets onboard LAN Airlines from Miami to Lima.

The Culinary Adventure Trip Giveaway winner will start the journey in Miami and receive:

To help homeowners tackle smaller DIY decorating projects with style and ease, Devine Color has created a new collection of 12 beautiful, trend-proof interior paint colors, offered – for the first time ever – alongside a selection of six coordinated, self-adhesive wallpapers. The new paint collection and Devine Color wallpapers are available nationwide at Target stores.

Devine Color is known for its artistic color sense, rich, creamy texture and carefully edited palette of 200+ luminous hues. Creative director Gretchen Schauffler mixes each by hand to create custom blends that stand the test of time and equates the new palette to a party, “where each hue’s personality pairs well with others and enhances the atmosphere”. In addition to its well-edited color range, the line also features smart sizes, including 8-ounce samples and new 2.5 liter cans that make purchasing the right paint quantities for accent walls, trim makeovers, furniture refurbishment and craft projects economical and stress free.

“We wanted to create a range of amazing neutrals and accent colors with enough depth to work with each other and the existing decor in any home,” said Schauffler. “To achieve that, we mix colors and undertones by hand until we achieve a custom color that feels utterly inspired for everyone. You don’t need 20 pinks when you have a pink strong enough to stand up to the rest of the rainbow.” 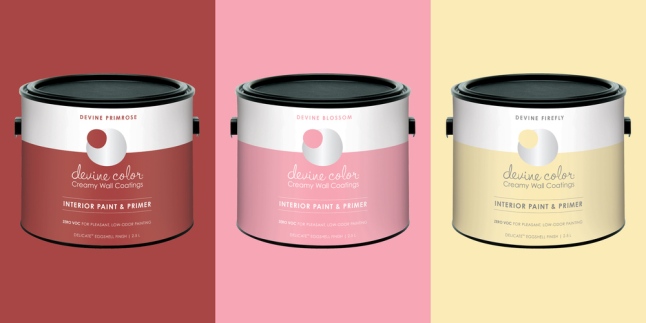 Such is the case with Devine Blossom, which Schauffler describes as a “mom’s dream pink“. Devine Primrose, a bold poppy red, is a chameleon with both blue and orange undertones. At the cooler end of the color spectrum, Schauffler wanted modern options with retro appeal. “Blues are tending toward turquoise and mint,” she said, “but those can be overwhelming or icy.” Devine Pond offers a dip in tropical waters, andDevine Horizon is a spa-like blue with a hint of green. A warm, rich navy, Devine Compass, points to a summer night sky.

Devine Twig and Devine Mirage offer cool neutral options that become the perfect foil for other colors. Warmer neutrals include rich, cocoa-colored Devine Buck and Devine Lightning, a creamy white with red undertones. Thanks to their complexity, these four hues are able to pair in unexpected ways with all of the collection’s other colors.

The line also proves that neutral need not be white or beige. Three stunningly subtle colors in the line can be used without fear of clashing with a room’s decor or fighting other accents: Devine Starlight is a dusky mid-range purple, Devine Firefly is a creamy, sunny light yellow, and Schauffler calls Devine Meadow a dream green. “Green can go institutional. We wanted Devine Meadow to be effortless, with a mix of yellow and blue undertones that feel natural and earthy.” END_OF_DOCUMENT_TOKEN_TO_BE_REPLACED

On May 13, Epic Records, in conjunction with the Estate of Michael Jackson, will release XSCAPE, an album of new music by the late Michael Jackson.  The project features eight new tracks, which the world will be hearing for the very first time on the new album.  XSCAPE is executive produced by Epic Records Chairman and CEO L.A. Reid, who, after an initial mining of Jackson’s archives by the Estate, was granted unlimited access to the treasures representing four decades of material on which Jackson had completed his vocals.

Reid curated the final list of recordings to deliver to the producers, who retooled the production to add a fresh, contemporary sound that retains Jackson’s essence and integrity.  It’s a process Reid calls “contemporizing.” The album’s lead producer, Timbaland was one of a handful of producers Reid believed had the gravitas, depth and range to creatively engage with Jackson’s work. Additional producers include global hitmakers Rodney Jerkins, Stargate, Jerome “Jroc” Harmon and John McClain.

The title of this album honors Michael’s album naming process.  He always chose a song from the album to name his projects and, beginning with THRILLER, used only one word titles, each with an edgy quality to them.   This is true of the new project.    Written by Michael Jackson and Jerkins, and produced by Jackson and Jerkins, “Xscape” has further significance in that it is the one track on the album that was ‘contemporized’ by the producer who recorded it originally in the studio with Michael.

XSCAPE is a long awaited collection of exciting new music that will thrill the legions of fans of one of the world’s most revered and best-selling artists, as well as attract a whole new generation discovering his artistry for the first time. In conjunction with the release of XSCAPE, Epic / Sony Music will launch an unprecedented global campaign with the One Sony sister companies, Sony Corporation, Sony Mobile Communications, and Sony Network Entertainment International drawing from all of Sony’s strengths and consumer reach.

For the ultimate fan experience, XSCAPE will also be available in a Deluxe Edition, which includes all of the sourced Michael Jackson recordings in their original form. The XSCAPEstandard and Deluxe Edition’s are available for pre-order beginning April 1 on iTunes.com/MichaelJackson and elsewhere, and available at all retailers worldwide on May 13.

The second edition of Art Basel in Hong Kong, whose lead partner is UBS, will showcase 245 of the world’s leading galleries across four sectors. 50 percent of the exhibitors have spaces in Asia and the Asia-Pacific region, underscoring Art Basel’s commitment to the region. While the main sector, Galleries, will present premier established galleries from across the world, Insights is dedicated to presenting precise contextual and thematic presentations by many important artists from the art scene in Asia. The Discoveries sector will provide a platform for younger galleries and Encounters will show large-scale sculptural installations by leading artists from around the world.

Encounters will show work presented by leading international galleries with exhibition spaces in Austria, Germany, Hong Kong, Japan, Mainland China, the Netherlands, New Zealand, Singapore, South Korea, Switzerland, Taiwan, Thailand and the United States. The artworks vary in scale, with some reaching over nine meters in height and others taking up over 60 square meters of exhibition space. Punctuating the Galleries sector, Encounters will be displayed on four sixteen-meter wide boulevards, sited on both exhibition floors.

Cecilia de Torres (New York) will present ‘Cube 48 Orange’, 2014 by Argentinean artist Marta Chilindron (*1951). Spanning 60 square meters of exhibition space, the sculpture hinges together like an accordion that when folded and closed forms a perfect cube. Visitors can unfold the cube, transforming the piece from its original, stable geometric form into a labyrinthine space.

Chi-Wen Gallery (Taipei) will present ‘The Letters (Live Performance)’, 2014 by Taiwanese artist Yu Cheng-Ta (*1983). During live performances art fair visitors will read out spam emails about advance-fee fraud schemes sent to the artist’s email account. All performances will be recorded and played between performances.

Eslite Gallery (Taipei) will show ‘Point’, 2014 by Taiwanese artist Michael Lin (*1964). The sculptural work consists of a grandstand with an illuminated rotating sign at the top. The seating area becomes a place to view from and a place to be viewed, a stage and a catalyst for social interaction. 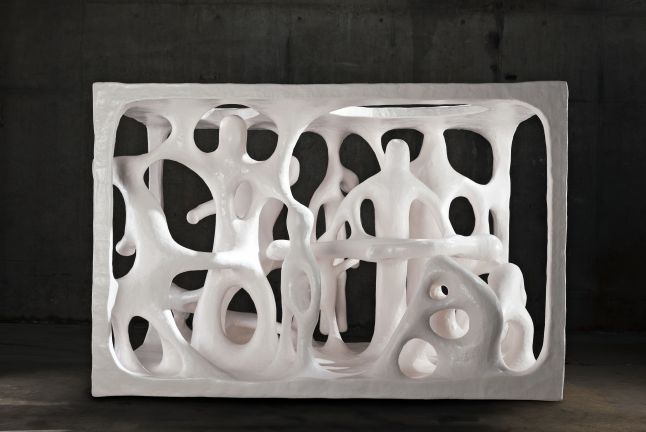 Galerie Urs Meile (Beijing and Lucerne) and neugerriemschneider (Berlin) show ‘Homeaway’, 2014 by German artist Tobias Rehberger (*1966). The work will be a re- creation and appropriation of Bar Oppenheimer, a bar in Frankfurt which the artist frequents. Made entirely out of unglazed, open-pored bone china, the bar will consist of walls, shelves, a counter with overhead structure and lights, and traditional Chinese stools.

iPreciation, Lee Wen, Ping Pong Go-Round, 2013, Presented at ‘The Realm in the Mirror – the Vision out of Image’ At Suzhou Jinji Lake Art Museum (2013), Courtesy the artist and the gallery