Who knew boxer briefs would start trending this holiday season! Now there’s Boxer Briefs – Techno-Style featuring DiscoRobo from TOSY Robotics! Check out this chorus line of boxer-wearing robots that really know how to ring their chimes. Their beat detection technology makes for just the right moves in this choreographed bell-ringing rendition of a holiday classic. ( Video available at:http://www.youtube.com/watch?v=fTf4XXyPdac&feature=youtu.be

DiscoRobo is the dancing, talking robot that’s activated by music and an interactive app (iOS, Android and Windows) that enables users to choreograph the robot’s moves to match the music with booty-shaking action. The robot is so into the music, its face just lights up with funny facial expressions that change as it dances. It can also dance to other sounds: beat box, drum beats, handclaps or even footsteps.

In chat mode, DiscoRobo responds to typed questions with witty remarks. When two are paired together, face to face, they chat with each other. In dance mode, just a shake of the phone or a swipe across the virtual DiscoRobo on screen makes the actual robot react and mimic the movements.

TOSY Robotics was founded by a robotics guru team and first went into operation in 2004 after many years of experience in mechanical engineering. From the very beginning, the Vietnam-based company has always placed the highest priority on research and development with the motto “Creativeness and modern technology are key factors for success.” It is the manufacturer of the Good Housekeeping’s Best Toy Awards 2011’s TOSY® AFO™, a flying boomerang with a smart LED system that can return precisely to its point of origin, and the Guinness World Records holder TOSY TOOP, a non-stop collectible battling top with flexible controllability. For more information about TOSY Robotics, visit: http://www.tosy.com/discorobo

Celebrating its 25th anniversary as an international event, the NAIAS is among the most prestigious auto shows in the world, providing unparalleled access to the automotive products, people and ideas that matter most—up close and in one place. One of the largest media events in North America, the NAIAS is the only auto show in the United States to earn an annual distinguished sanction of the Organisation Internationale des Constructeurs d’Automobiles (OICA), the Paris-based alliance of automotive trade associations and manufacturers from around the world.

As the North American International Auto Show 2014 (NAIAS) celebrates 25 years of bringing the best of the auto industry to the world stage in Detroit, it does so in a transformed Cobo Center, a world-class venue fitting for a world-class show. It all starts with the Press Preview on Jan. 13, and runs through the Public Show, concluding on Jan. 26.
“After 25 years as one of the premier, global auto shows, the NAIAS continues to amaze,” said Bob Shuman, chairman, NAIAS 2014. “In fact, if it’s possible to top last year’s spectacular show, considered by many as the ‘best show – ever,’ we are confident that we will do it this year with fantastic product unveilings, an automotive technology showcase, an improved venue, and Detroit hospitality.”

Some 50 global vehicle unveilings are expected to be made on Detroit’s world stage, according to Shuman.

“It will be an absolute news feast for the journalists [and automobile fans alike] who cover the show from around the world,” he said.Also this year, journalists and visitors to NAIAS will enjoy activities in Cobo Center’s new Atrium, the focal point of the facility that now features spectacular views of one of the area’s greatest natural resources – the Detroit River. Additionally, the Grand Riverview Ballroom, formerly Cobo Arena, adds a magnificent and enormous space for meetings, conventions and vehicle unveilings. Add to that renovated meeting rooms, new networking space and infrastructure improvements, and Detroit’s Cobo Center stands among the list of some of the world’s finest event venues. 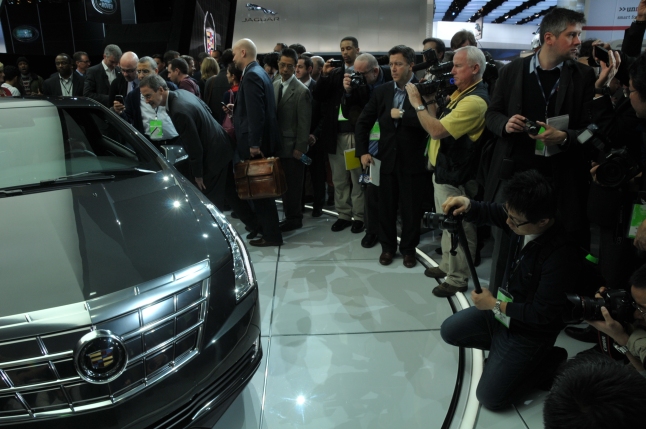 “The changes to Cobo are not all that’s new,” said Shuman. “Several manufacturers will be debuting all-new exhibits at this year’s show. Attendees during the Press Preview, Industry Preview, Charity Preview and Public Show will be amazed at the changes inside and out. It’s truly fitting for our 25th Anniversary celebration.”

Hanes® , America’s No. 1 sock brand, is helping spread holiday comfort by donating 250,000 pairs of socks to those in need and the homeless. The socks will be distributed by The Salvation Army nationwide and five homeless shelters in New York and California. This year’s donation marks the fourth consecutive year Hanes has worked with The Salvation Army, which provides assistance for nearly 30 million Americans each year, by providing socks — the most requested but least donated item needed at the organization’s centers.

This season, Hanes is also expanding its yearlong partnership with Mark Horvath, an advocate for the homeless, and delivering portions of the sock donation to local nonprofit organizations that aid those in need and the homeless. Recipient organizations are Covenant House, NYC Rescue Mission and Coalition for the Homeless, all in New York City; Rescue Mission in Syracuse, N.Y.; and Los Angeles Mission in Los Angeles.

A longtime partner, Horvath helps distribute Hanes socks throughout the year to those affected by homelessness as part of his mission to bring a face to the growing issue as founder of Invisible People. “I’m thrilled to join Hanes again this year to deliver socks for the holidays,” said Horvath. “Through the years I’ve seen firsthand how others have benefitted from the gift of clean socks. It’s an item that many folks often take for granted.”

“Hanes is proud to continue our annual tradition of providing socks to those in need,” said Sidney Falken, Chief Branding Officer, Hanes. “We are grateful for the chance to give back to others with a donation of half a million socks and make the holidays more comfortable.”

Over the past five years, Hanes has donated 2.7 million socks to the needy at the holidays. Last year,Hanes also donated 50,000 pairs of socks to East Coast victims of Superstorm Sandy.

To share a story about providing comfort this holiday season or join the conversation, follow #HanesforGood throughout the holiday season. For more information about Hanes, visit http://www.hanes.com or http://www.facebook.com/hanes. 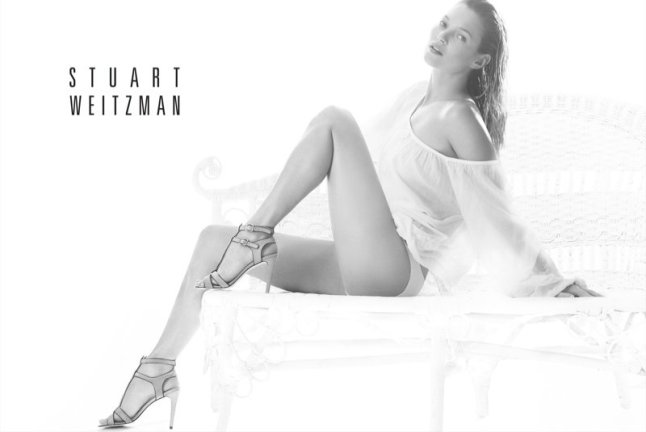 Elegance undone, imbued with unmistakable sex appeal, inspired by the feeling of freedom and the warmth of the sun. Kate Moss strips down (yet again), literally and figuratively, in Stuart Weitzman’s Spring 2014 ad campaign to reveal the definitive essence of effortless summer style. Photographed again by Mario Testino, in keeping with what is now an iconic visual vocabulary, the campaign invokes a sun-kissed and sensual energy, hinting at long, languid days in St. Tropez, with luxury footwear that seduce from day to night.

Minimal make-up, wet hair and barely-there cover-ups enhance this laid-back, luxe Bohemian look and provides a glimpse of the supermodel at her most beautiful. (She’s the only woman I know that looks absolutely phenomenal naked.) Sublime simplicity is a key theme for the new Stuart Weitzman collection, evidenced most distinctly with the introduction of THE NUDIST. Sexy, strappy, sleek, minimal – this sandal is as close to bare as a fashionable foot can get.

Moss, who debuted as the face of the Stuart Weitzman brand in the Spring 2013 ad campaign, was chosen because of her unparalleled status as a global style icon. Moss exudes a sense of style and confidence that every woman aspires to emulate and in 2014, she is walking in Stuart Weitzman shoes.

Whether you are looking to unwind during the hectic holiday season, create an intimate atmosphere for holiday guests, or even looking for a holiday gift for a friend, ESPA has the perfect candle to create an inviting environment at home and one the receiver would appreciate. The ESPA Candle Collection consists of three wonderful scents and sensual aromas, and all displayed in beautiful glass, designed to create the perfect atmosphere for every occasion.

The Lemon & Tonka Bean Candle ($50), is an uplifting scented candle that infuses your surroundings and recreates the spa experience. A divine aroma, low lighting, soft sound, it’s the quintessential spa experience. With our richly aromatic candle – a careful balance of wick, hand poured wax and pure essential oils to uplift your senses with a zesty hit of Lemon, an intensely floral heart note of exotic Ylang Ylang and crushed Tonka Beans. The Bergamot & Jasmine Candle ($50 has a citrus top note of Bergamot and floral bouquet of Jasmine. The flickering flame will infuse your surroundings with a wonderful citrus top note of Bergamot, a floral bouquet of sensual Jasmine and a hint of Cedarwood to suffuse your home with a sensual ambience to welcome you home every day. The Espa Candle Collection is available at www.espaskincare.com and select spas worldwide