AMERICA’S HIGHEST HONOR FOR A CAREER IN FILM TO BE PRESENTED JUNE 5, 2014

Sir Howard Stringer, Chair of the American Film Institute’s Board of Trustees, announced today the Board’s decision to honor Jane Fonda with the 42nd AFI Life Achievement Award, the highest honor for a career in film. The award will be presented to Fonda at a gala tribute on June 5, 2014 in Los Angeles, CA. The 42nd AFI Life Achievement Award tribute special will return for its second year on TNT when it airs in June 2014, followed by encores on sister network Turner Classic Movies (TCM). 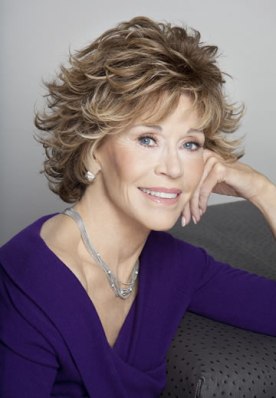 The Sponsor of the 2014 AFI Life Achievement Award tribute to Jane Fonda is American Airlines, the official airline of the American Film Institute.

“Jane Fonda is American film royalty,” said Stringer. “A bright light first introduced to the world as the daughter of Henry Fonda, the world watched as she found her own voice and forged her own path as an actor and a cultural icon. Today she stands tall among the giants of American film, and it is AFI’s honor to present Jane Fonda with its 42nd Life Achievement Award.”

The AFI Life Achievement Award was established by the AFI Board of Trustees on February 26, 1973 and is presented to a single honoree each year based on the following criteria as mandated through a resolution passed by the AFI Board of Trustees: “The recipient should be one whose talent has in a fundamental way advanced the film art; whose accomplishment has been acknowledged by scholars, critics, professional peers and the general public; and whose work has stood the test of time.”

Jane Fonda joins an esteemed group of individuals who have been chosen for this distinguished honor since its inception in 1973. This group includes her father Henry Fonda (1978), making them the first father/daughter honorees in the history of the award. Kirk Douglas and Michael Douglas share a similar precedent as recipients in 1992 and 2009, respectively. Past winners include:

Jane Fonda is part of an American acting dynasty. Where others would have been defined by their place in the family tree – the daughter of an American screen legend, the wife of a famous director, activist or billionaire broadcaster – it is Fonda herself, an Academy Award®-winning actor of KLUTE (1971) and COMING HOME (1978) and star of more than 40 other films, whose image as an artist and activist eclipses all others. Her path through the starry firmament of Hollywood and the world beyond has ultimately been determined by the gravitational pull of her own power.

Jane Seymour Fonda was born in New York City in 1937 to a socialite, Frances Seymour Brokaw, and an up and coming actor, Henry Fonda. By the time she was old enough to pursue her own career, Fonda’s father had become a movie icon of American grit and integrity. At 17, she appeared with her father in a production of “The Country Girl” at the Omaha Community Theatre. She joined the Actors Studio in 1958, studied with Lee Strasberg and made her screen debut two years later opposite Anthony Perkins in TALL STORY (1960) directed by Joshua Logan.

Fonda’s early screen roles revealed a talent for light comedy in well-crafted adaptations of Broadway plays like PERIOD OF ADJUSTMENT (1962), ANY WEDNESDAY (1966) and BAREFOOT IN THE PARK (1967). Her role in BARBARELLA (1968) established her in pop culture before she landed dramatic roles in THEY SHOOT HORSES, DON’T THEY? (1969) and KLUTE. Her portrayal of prostitute and stalking victim Bree Daniels earned Fonda her first Academy Award®. Fonda’s stirring performances in COMING HOME, JULIA (1977) and THE CHINA SYNDROME (1979) won praise from the nation’s film critics.

Fonda’s acting triumph of the 1980s was the film adaptation of Ernest Thompson’s play, ON GOLDEN POND (1981), in which she appeared with her father – whose performance earned him his only Academy Award® for Best Actor. Fonda herself was nominated for Best Supporting Actress. Other major films during this decade were NINE TO FIVE (1980), AGNES OF GOD (1985) and STANLEY AND IRIS (1989), after which she announced her retirement.

Retirement didn’t last as Fonda returned to the performing arts where she triumphed on the Broadway stage in Moises Kaufman’s “33 Variations” (2009), and appeared in such films as MONSTER-IN-LAW (2005), GEORGIA RULE (2007), PEACE, LOVE & MISUNDERSTANDING (2011) and Lee Daniels’ THE BUTLER (2013). She currently plays Leona Lansing in the HBO series THE NEWSROOM.

The AFI is America’s promise to preserve the history of the motion picture, to honor the artists and their work and to educate the next generation of storytellers. AFI programs include the AFI Catalog of Feature Films and AFI Archive, which preserve film heritage for future generations; the AFI Life Achievement Award now in its 42nd year; AFI Awards, honoring the most outstanding motion pictures and television programs of the year; AFI’s 100 Years…100 Movies television events and movie reference lists, which have introduced and reintroduced classic American movies to millions of film lovers; year-round and special event exhibition through AFI Fest presented by Audi, AFI Docs presented by Audi and the AFI Silver Theatre and Cultural Center; and educating the next generation of storytellers at the world renowned AFI Conservatory, recognized for the quality of its instructors and speakers and its notable alumni.