At the FALL/WINTER 2013 shows earlier this month in New York City, several designers and brands celebrated significant milestones/anniversaries. NAUTICA came back to the runway with a 30th anniversary show. LACOSTE and its Creative Director OLIVEIRA BAPTISTA commemorated the 80th Anniversary of the brand with a collection that, while it was far from Rene Lacoste’ original “L.12.12” white “petit pique” cotton shirt, it was still a classic (yet modern) take on the heritage of the brand. And DENNIS BASSO, the Fur King of Manhattan, observed 30 fabulous years of masterful handling of animal skins with an audience packed with well-wishers and his favorite clients.

While ZANG TOI didn’t mark an equally significant anniversary with his collection (although he has been a vital present in the New York fashion industry for more than 15 years), his fall/winter 2013 collection stood out in my eyes because he has clearly learned from—and applied—his years of experience as a designer. In the past, he has been accused—by some—of being “too over the top” with his designs. But some of my most treasured memories of fashion weeks past has been Zang Toi collections that explored their inspiration to the fullest while still being beautifully executed. You also have to remember that he was designing in a time (the mid-1990s – early-200s) where fantasy and glamour were the keynote features of every fashion week from New York to Paris. He knew then (and now) his customer, who looks to him to make them the belle of the ball. His beautifully-cut day suits are classic pieces that earn their way into their wardrobes.

BUT as the years has gone by, he has learned his lessons well. He, of course, has had his share his collections that didn’t completely come together but a lesson learned is a lesson learned well. Mr. Toi has since found a way to remain true to his aesthetic, his love of glamorous dressing while at the same time becoming more grounded, more circumspect. This was especially evident in his most recent collections, such as his 2013 SPRING/SUMMER line where he was inspired by the romantic French Riviera. This collection showed him at his most elegant without overreaching. He continued down this road in beautiful form with his 2013 FALL/WINTER COLLECTION, which was a re-imagined take on the “historical and opulent looks of Faberge Egg and Peterhof Palace” of Imperial Russia. Here too, he gave us Russia without descending too far off the charts into caricature. He gave us the fantasy while staying firmly on the ground. Catherine the Great would have been proud to wear one of these designs.

The Faberge egg influence can be seen in the cut of some of the coats at the top of the show, in the accessories (especially those chandelier earrings) and in the crystal and gold embroidery on the evening pieces at the bottom of the presentation. There was a judicious use of animal skins (such as shearling-trimmed hemlines and collars, piping of sable, fox, etal) throughout the collection that speaks to understated embellishment, a trend that we saw EVERYWHERE and from most EVERYONE. A majority of the collections shown in New York, London, and Milan have had fur-trimmed accents and piping throughout. His standout daywear pieces included his classic cashmere/wool trouser suits with thin banker stripes, his black double-faced wool crepe cardigan and square-neck dinner dress finished off with an embroidered border and his first look, a light brown (amber) Loro Piana cashmere egg-shape, soft-shoulder coat with an attached fox peak lapel. 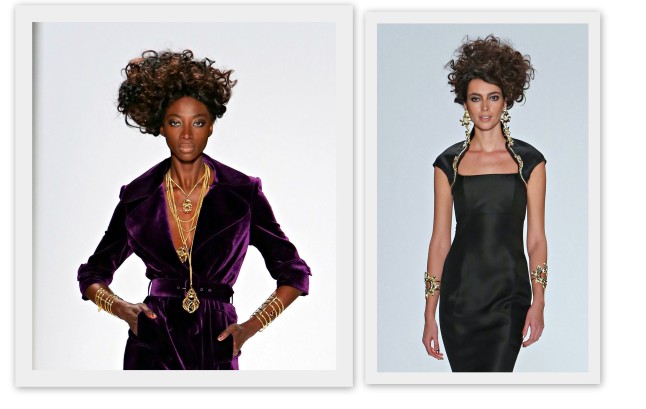 For evening, as in his spring/summer 2013 collection, he pulled out all the stops. The pieces here were elegant without being too precious, starting with the Imperial Palace Chinoiserie jacquard print floor-length coat and A-line gown. Other standout designs here includes his Imperial Palace Chinoiserie jacquard print strapless gown, his sapphire hammered silk/satin “Coronation” gown, the jet silk/velvet “Peterhof” ballroom gown with Faberge Egg beaded accents on the bodice and matching fox stole and the Grand Finale, a gorgeous, sweeping black velvet/silk Opera coat with gilded Faberge Egg accents and matching gown.