DENZEL WASHINGTON played rogue spy and a hero pilot with a few problems in 2012, the latter role earning him his sixth Academy Award nomination, among other accolades. Washington also reclaims a title he last held in 2008 – AMERICA’S FAVORITE MOVIE STAR, rising one place from last year. Clint Eastwood had an “interesting” year and spoke to a now infamous empty chair, but remains at number two, and all around nice guy TOM HANKS rises one spot to the number three position. These are some of the results of The Harris Poll ® of 2,141 adults surveyed online between December 12 and 18, 2012 by Harris Interactive®.

Or, at least the rest of our top ten list… Falling from number one to a tie for number 4 is JOHNNY DEPP. The actor who has a lot of the paparazzi wondering “did he or didn’t he” (get married, that is), BRAD PITT, shares the fourth spot, after not being on the top ten list since 1998.

There is always one constant on the top ten list of America’s favorite movie stars and, yet again, JOHN WAYNE is on the list, this year 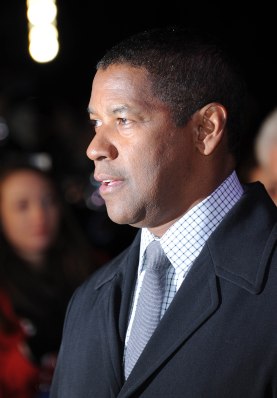 Rounding out the top ten are two actors making it onto the list for the second time. She’s earned accolade after accolade throughout her career, and for the second time MERYL STREEP makes this list at number 9 (her first time being in the number 8 spot in 2009). Meanwhile, MATT DAMON joins fellow Ocean’s stars Pitt and Clooney on the list at number 10 (his first time on the list was in a tie for the seventh spot in 2007).

Age, region, gender and political party and leanings can often mean different favorite movie stars. Men cite CLINT EASTWOOD as their favorite while women say it is DENZEL WASHINGTON. Echo Boomers (those aged 18-35) and Baby Boomers (aged 48-66) agree on Denzel Washington as their favorite actor, while for Gen Xers (aged 36-47) the #1 spot is a tie between Brad Pitt and Johnny Depp. John Wayne is the favorite among Matures (those aged 67 and older).

TABLE 2
WHICH MOVIE STAR IS #1 AMONG DIFFERENT GROUPS?

This Harris Poll was conducted online within the United States between December 12 and 18, 2012 among 2,141 adults (aged 18 and over). Figures for age, sex, race/ethnicity, education, region and household income were weighted where necessary to bring them into line with their actual proportions in the population. Propensity score weighting was also used to adjust for respondents’ propensity to be online.

All sample surveys and polls, whether or not they use probability sampling, are subject to multiple sources of error which are most often not possible to quantify or estimate, including sampling error, coverage error, error associated with nonresponse, error associated with question wording and response options, and post-survey weighting and adjustments. Therefore, Harris Interactive avoids the words “margin of error” as they are misleading. All that can be calculated are different possible sampling errors with different probabilities for pure, unweighted, random samples with 100% response rates. These are only theoretical because no published polls come close to this ideal.

Respondents for this survey were selected from among those who have agreed to participate in Harris Interactive surveys. The data have been weighted to reflect the composition of the adult population. Because the sample is based on those who agreed to participate in the Harris Interactive panel, no estimates of theoretical sampling error can be calculated.

These statements conform to the principles of disclosure of the National Council on Public Polls. The results of this Harris Poll may not be used in advertising, marketing or promotion without the prior written permission of Harris Interactive.

HARRIS INTERACTIVE is one of the world’s leading market research firms, leveraging research, technology, and business acumen to transform relevant insight into actionable foresight. Known widely for the Harris Poll® and for pioneering innovative research methodologies, Harris offers proprietary solutions in the areas of market and customer insight, corporate brand and reputation strategy, and marketing, advertising, public relations and communications research. Harris possesses expertise in a wide range of industries including health care, technology, public affairs, energy, telecommunications, financial services, insurance, media, retail, restaurant, and consumer package goods. Additionally, Harris has a portfolio of multi-client offerings that complement our custom solutions while maximizing our client’s research investment. Serving clients in more than 196 countries and territories through our North American and European offices, Harris specializes in delivering research solutions that help us – and our clients—stay ahead of what’s next. For more information, please visit www.harrisinteractive.com .